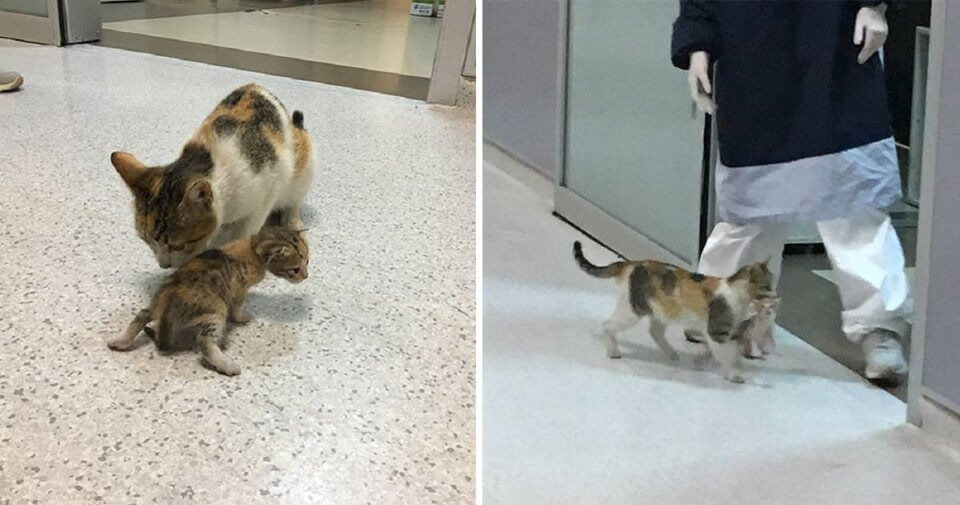 Recently, a Twitter user by the name of Merve Özcan shared some photos of a stray mother cat bringing her sick kitten to the emergency room at the Kanuni Sultan Süleyman Hospital in Istanbul, Turkey. “Today we were in the emergency room of the hospital when a cat rushed to bring her offspring in her mouth,” Özcan wrote on Twitter. Not surprisingly, the heart-warming photos quickly went viral on Twitter before being picked up by the mass media. According to Merve Özcan, she was waiting for her dad in the hospital corridor holding when she saw the stray cat carrying her poorly baby in her mouth. At that moment, she seemed to know exactly where the cat was going. Özcan was worried about her father, but the tense moment was immediately lightened by the cat and her baby. “I was very surprised when I saw her because she seemed to know [the hospital] better than me,” Özcan told The Dodo. “It was obvious that she knew where to go.” Luckily, the Turkish people love and respect stray animals, so the hospital staff immediately came to help the fluffy family, checking over the baby for any health issues. They also gave the mama cat some milk and food while they were checking her kitten. “The medical staff was also very happy to see the cat and kitten, went to them and loved and cared for them,” Özcan said. “I think it was a cat that employees already know, and there were people who saw it there before.”

Thankfully, both cats appeared healthy after being checked over by doctors. But, just to be sure, they directed the cat to a veterinarian. However, the mother cat didn’t want to leave her caretakers. “Her kitten was not sick, but she wanted to stand there,” Özcan said. “Even when we left, the two were still there, confidently standing amongst the doctors.” As a cat owner, Özcan was happy to see this touching moment. “Cats are very common creatures in my country,” Özcan said. “However, I was very surprised to see such a thing in the emergency for the first time.”

Love this heart-warming story? Please let us know your thoughts in comments and don’t forget to share this story with your friends and family!

Stray Kitty Chooses His Human In A Park, Wouldn’t Let Him Go