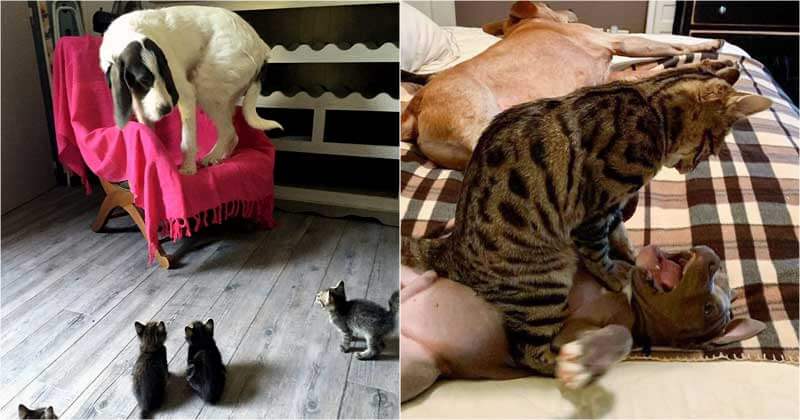 If you are raising both cats and dogs, you must see some scenes that prove cats are the biggest jerks to dogs. They are smaller in size but prefer acting like the boss of the gang. While some cats and dogs get along so well, it’s quite normal to see the cats steal the food in the bowl of the dogs or slap the dogs in with claws in the face during the fight. They are trouble makers. They even bother the dogs even when they’re sleeping. The dogs do nothing but the cats seem to unhappy to let them be. But sometimes, this is a way that cats and dogs show love and care to each other. Their fight is sometimes not a conflict at all. They are just playing with each other.

We’ve rounded up 30 hilarious pictures of cats acting like the biggest jerks to their live-in canine pals. If you’re finding something adorable to start a day, just give these a look. Those who also have cats and dogs, can also share the same picture of your pets. If you get interested, write the caption for each photo and, don’t forget to leave your comments below. Let’s get started!

#1 Help!!! I Am Trapped In The Corner By Vicious Beasts #2 They Were Both Sleeping 3 Minutes Ago #3 Who understand my sorrow? He stole my bed already #5 The Real Murderer Is In Your House #6 My Friend Prefers Sleeping In My Bed Than Hers #7 When You Live With A Too “Energetic” Friend #11 Why Do You Keep Watching My Moving? #12 When Your Cat Tries To Drown Your Dog #13 You Understand Why She Is Called Godzilla, right? This Cats Owner Comes Home After a Long Separation… You Won’t Believe How the Cat Reacts!

10+ Times Cats Cracked Us Up

24 Heroic Cats Who Saved Their Own And Other Species

Kitten Pulled From L.A. Wildfire Just Wants Someone To Hold Her