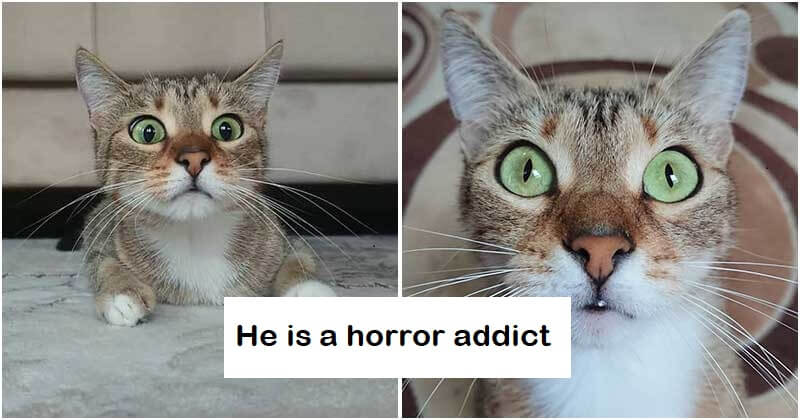 We get scared while watching horror movies, and this is no exception to our naughty cats. The loud and sudden noises, as well as the background music of a horror movie, are all enough to fear to anyone. Our aloof and confident feline friends would probably run out of the room or just freeze on the spot in fear. However, the cat in this post is different. He is a horror addict. Meet Togepi, a cute tabby cat who loves being scared. He was rescued from a car engine block, was adopted out and then rejoined the Happy Cat Family. “I named her Togepi from the series Pokemon, because in Pokemon, Togepi grows in an egg and when the egg hatches, she thinks the first person she sees is her mother. She was just like that when I carried her in my backpack. I fostered her for a couple days then a nice guy adopted her. After 2 months, Togepi came back to me because of personal issues. She didn’t have any problem with fitting into the tabby family,” Togepi’s human said. Watch Togepi’s reaction in the video below:

As you could see in the video, the cat sat on the carpet in front of the television while a horror film (most likely Psycho) was playing. His eyes were glued on the TV screen, watching the random moving objects in it. He had the funniest reaction to whatever was happening on the small screen. According to Togepi’s human, this was not the first time this kitty has done this, nor would it be the last.

Please share this video with your friends and family members!

10+ Absolute Chubbiest Cats That Will Make Your Day