Here’s a touching photo of Chief the dog, saying the final farewell to his owner William D. ‘Bill’ Schiller. Chief was a rescue dog, who Schiller and his girlfriend Anne Marie Sibthorp adopted in 2014. They were buddies from the beginning and had been inseparable.

“There’s a certain chemistry between a person and a dog when they’re really special,” said Sibthorp. “They bonded; they belonged together.”

Sadly, Schiller crossed the rainbow and he was laid to rest in Canton on April 13 at Forest Hill Cemetery. Before he was laid to rest, friends and family gathered to offer their final farewells to Bill Schiller. But they weren’t the only ones in mourning.

Sibthrop knew that she had to do something for his boyfriend, so she took Chief into the chapel to meet Schiller the last time. However, no one could have imagined how tenderly the dog would express his last goodbye to his owner, as Sibthorp led him to Schiller’s casket. 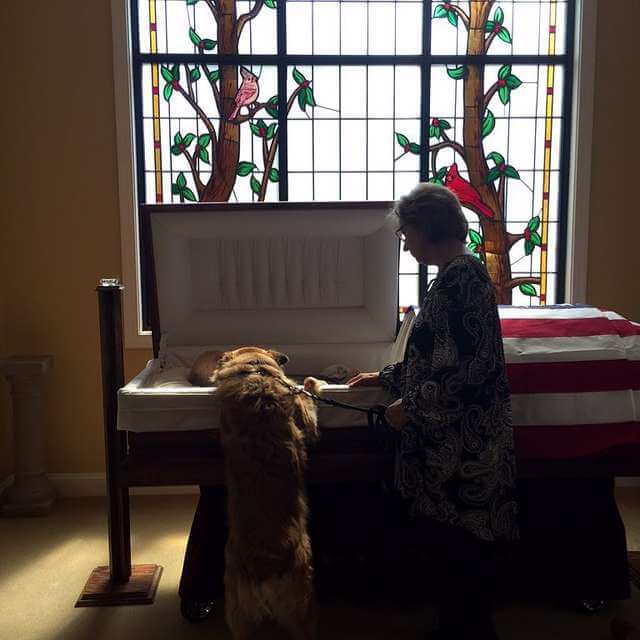 “He got to say goodbye to his daddy,” Sibthorp said. “And that was important.” She will never forget this touching moment in our chapel when Chief said goodbye to his best friend.

“He stretched his neck in as far as he could, and he gave Bill just one little quick lick on his ear, and of course, Bill didn’t move,” Sibthorp said. “And Chief laid his head right down by his head, and just laid there for the longest time.”

“To see a dog standing on his tippy toes looking into a casket struck the heartstrings of this community,” said Sam James, director at the James Funeral Home in Huntersville, North Carolina. “Anne Marie (Sibthorp) sent us the photo,” said James. “We asked if she would mind if we shared it with the community because we found it to be such a touching photo.”

12 Dog Breeds That Are Not Good At Swimming