Following on from success of animated classic The Jungle Book, director Jon Favreau and Disney created a new version of The Lion King that was released in cinemas on 19th July 2019, starring Donald Glover, James Earl Jones, Seth Rogen, Beyoncé, and Billy Eichner. If you have seen this version in movie theater, you may not know that the cute baby Simba in the movie was modeled after a real baby lion. The cub named Bahati who lives in Dallas Zoo in Texas, the United States of America. When Bahati was just a month old, the zoo shared cute video of her movements with Disney’s animation team for reference. It’s hard not to be inspired by something so sweet. For this reason, she became the model for the remake of The Lion King. 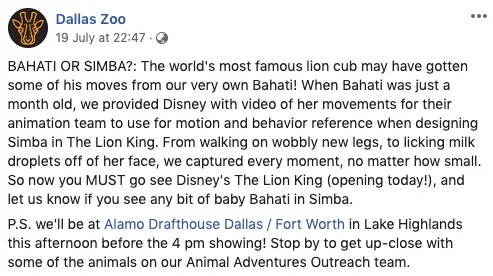 At the time her video was sent to Disney, she was just a month-old cub. However, Bahati is now a fully-grown, two-and-a-half-year-old lioness. If you love Bahati, you can go to movie theaters or the Dallas Zoo’s lion exhibit, where you will meet the bewhiskered face behind Disney’s new Simba. Feel free to share this post because Bahati is so sweet, and The Lion King is worth to seeing.