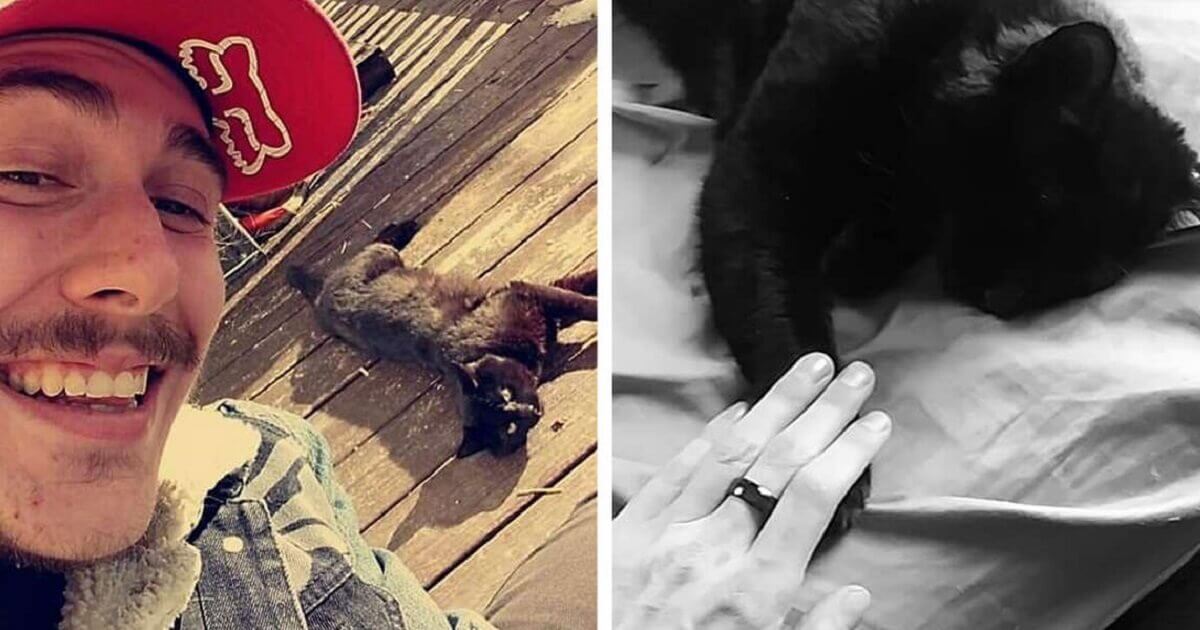 Three years ago, a man named Nathan Sonoras adopted a black cat, Loki and the two quickly became the best friends. Loki the cat started out life as a stray but one day he came into the man’s life as he was roaming the street. Nathan told The Dodo, “He’s the sweetest little thing. He likes to jump on my lap and cuddle with me and he is very lovable.” Loki is an outdoor cat, he loves taking himself on walks through the neighborhood and surrounding areas. So, Nathan let him wander around because he always knew to return once he was done with his daily roaming. Sadly, Loki had come to a tragic end and Nathan thought that he would never see his companion again. About 5 p.m. Monday, April 15, Nathan returned home after work and spotted something black near his house. He stopped and approached the lifeless in the road, it was a black cat lying motionless. He realized it to be Loki with his markings and he had apparently been hit by a car. “I saw this black thing in the road up ahead as I was driving. I thought it was a sweatshirt or something at first. But I got closer and saw it was a black cat,” he said. “My greatest fear of having an outdoor cat had been suddenly realized.”

Nathan Sonoras was distraught when a car struck and killed his black cat. He called his girlfriend to the spot and they took the cat’s body to a quiet corner of his yard where they could lay him to rest. They then held a little funeral to remember Loki. “I was incredibly emotional. I was crying, saying, ‘My cat’s dead and I can’t believe this,’” Sonoras said. “It was pretty traumatizing.”

But little did he know what was about to happen next and those final goodbyes were premature. On the next morning, Loki appeared to be returning home after a casual stroll. He was stunned when it greeted him hours later. Loki was actually still alive and well. “I jumped back. I was so in shock about the whole thing. I told my dad, ‘What’s going on? I just buried that cat last night,’” Sonoras said. “My dad was shocked as well. Loki is alive somehow.”

“I just held him and bawled my eyes out like a baby,” Sonoras said. “Did I wake up in a parallel universe where Loki hadn’t died? Or did I wish him back to life?” Sonoras realized then that the dead cat wasn’t his own. He hopes to spread the word so that the cat’s family can be made aware. Loki is back at home and Sonaras is rethinking whether he should give his cat so much freedom outdoors with the traumatizing experience he went through.