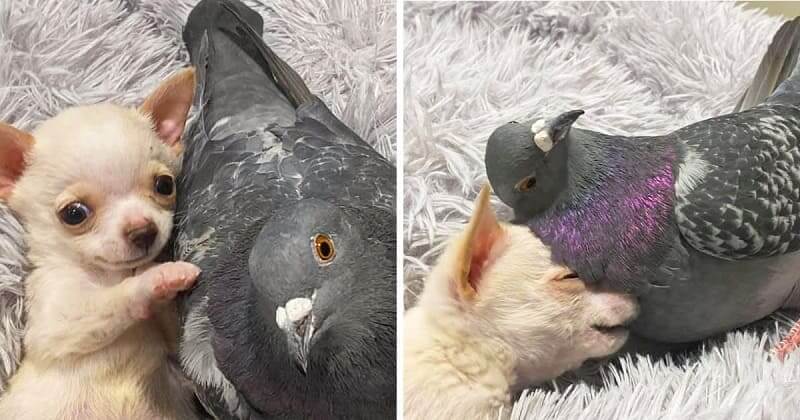 You know that animals from different species live together can be great friends. But have you ever seen friendship between a dog and a pigeon yet? It seems that these animals should be a very unlikely combination for friendship, but the story of Herman the pigeon and Lundy the puppy below will show you that true friendship knows no boundaries. And this bond is even more special when they both lack something fundamental in their lives – one can’t fly and the other can’t walk. Lundy, a two-month-old Chihuahua, who was born with a condition that made him unable to walk properly. For this reason, he was placed under the care of The Mia Foundation in New York, which specializes in helping animals with disabilities. It was there that Lundy met the flightless pigeon Herman, who has become his best friend. Just like Lundy, Herman was unable to fly due to a suspected injury or illness, so he was taken to The Mia Foundation last year. With a lot in common, the two animals seem to have found comfort in the company of each other, and it’s just beyond adorable! Sue Rogers, the center’s founder, said that the two first met when she set Herman on a dog bed and started caring for Lundy. They looked deeper and seemed to find a new friend in one another. They started interacting immediately in a very cute way. Now Herman and Lundy are inseparable, they often cuddle together somewhere at the rescue’s facilities. Though they were facing challenges, their blossoming friendship has a happy ending to everything they’ve been through.

Love this sweet story? Feel free to share it with your friends and family members! If you have your own examples of unusual friendships, you can tell us your stories in the comments below!