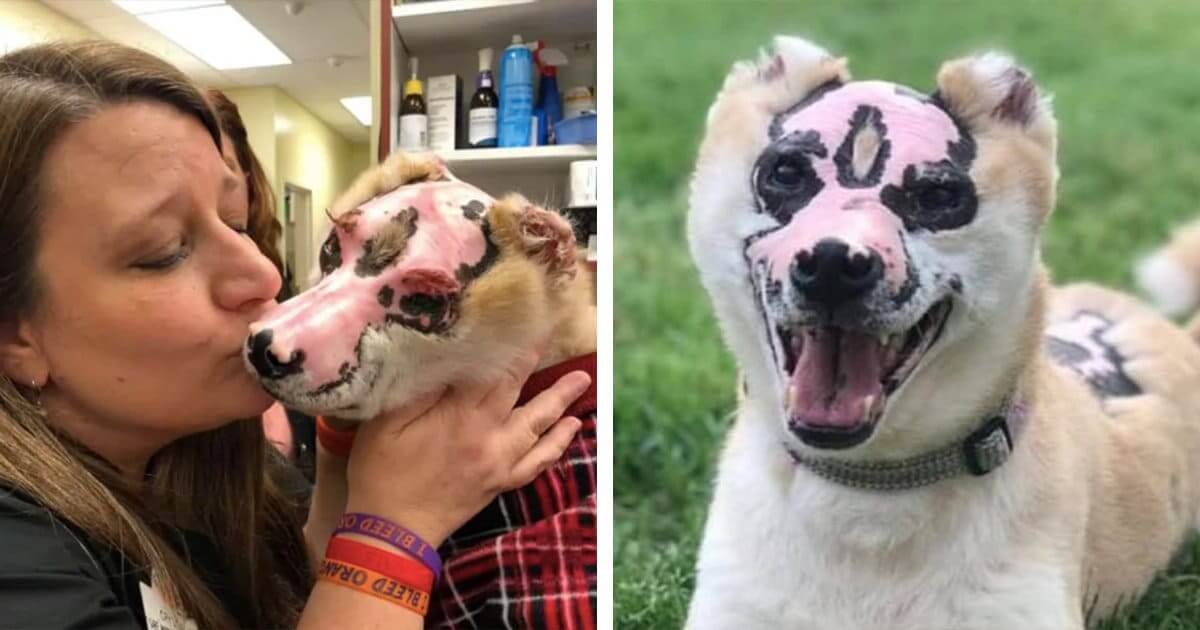 Meet Taka, the Shiba Inu dog who survived magically after being injured in a house fire, and now he is training to be a therapy dog at burn center. Taka’s life nearly ended in a fire in October 2018. He was asleep on a screened-in porch when the house caught on fire. At the time, his family couldn’t get to him in time, and they ran out without him. Then, a miracle happened. Taka woke up, managed to escape from the porch on his own, and ran down the street. A kind neighbor took him to the Care More Animal Hospital in Martinez, Georgia to receive treatment for his burns. Unfortunately, he got severe burns on his eyes, mouth, ears, and belly. He also went blind as a result. Taka’s family went to see him in the animal hospital, but they decided to surrender him there because they couldn’t properly care for him with his wounds. The vets at Care More absolutely fell in love with Taka, so one of the vets named Emily Martin began to take him home with her in the evenings. Martin has decided to become more than Taka’s vet — she’s become his mom. “He likes his belly rubs, and he loves food, so he’s a little piggy,” Emily said to The Dodo. “He also likes to cuddle.”

After several weeks of treatment, Taka was ready for moving into a foster home. However, one of the vet techs at the clinic, Chrystal Lesley, offered to let him join in Canine Training Project, a training program that helps to train dogs of all ages. “[Older dogs] can be trained just like any other dog,” CTP founder, Mandy Foster told WRDW News. “Sometimes it takes a little bit longer, but in Taka’s case, he’s nine years old and he has flown through his training. He’s brilliant.” “He’s got the right temperament for it,” Mandy said. “Of course he has the scars to show for it and he can relate to a lot of the people there so I think it’s going to benefit both him and the patients there.” Taka passed his Canine Good Citizen test on July 26, 2019, so he is now able to begin working with burned patients as a therapy dog. Taka is a wonderful therapy dog who is dedicating his life to comforting and supporting burned patients. We’re so happy that he’s gotten a new lease on life after his tragic accident.

Please share this heartwarming story with your friends and family members!

Dog Insists On Being Tucked Into His Bed Every Night