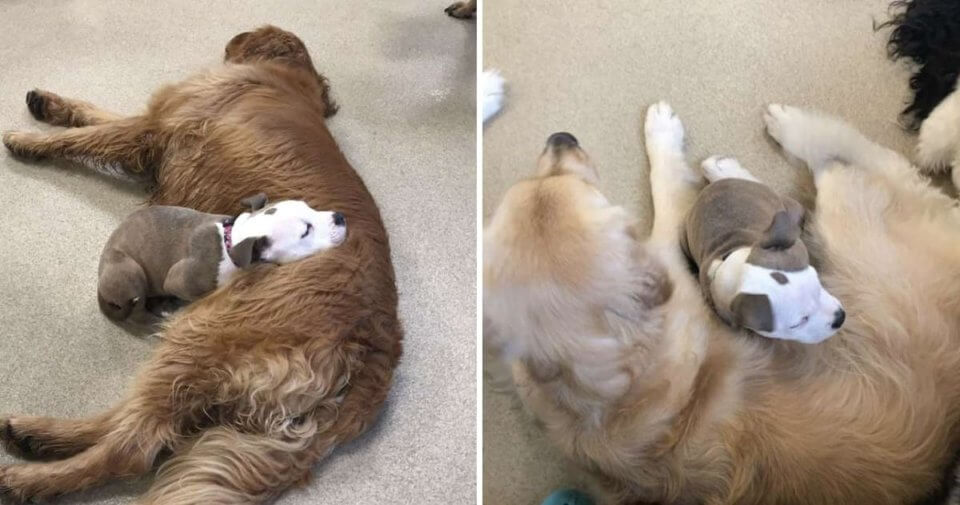 Edna is a sweet dog who loves going to doggy daycare, and she has been going there since she was just a puppy. She has her daily habits at home, and also has habits and routines at daycare. Edna often plays for about three to four hours until she feels the need to sleep. However, choosing a napping spot can be a challenge as there are so many dogs! For this reason, Edna quickly came up with a clever way to choose the best nap spot for her. According to staff at the day care, as soon as she wants to take a nap, she finds the fluffiest dog at day care that day and uses them as her pillow. Problem solved!

For Edna, size doesn’t matter. She can take a nap on a big dog… …and she can also snap on a small one: The best part is all of her friends don’t seem to mind at all, and they are happy to help her do just that.

“All the dogs seem to enjoy the snuggling company,” Brianna Gottfried, one of Edna’s family members, told The Dodo. “Even the tiny wiener dogs.” When she was a little puppy, it was definitely easy for her to snuggle other dogs and choose a pillow. But even now that she’s bigger, her love for snuggling doesn’t go away. Edna refuses to stop doing this because she just loves to use other dogs to take naps. Edna loves sleeping with her friends so much that it takes some effort to wake her up and bring her home. “When it’s time to go home I always have to peel her off of another dog,” Gottfried said. Edna’s habit is not a problem, so doggy daycare allows her to do it as much as she can!

Love this adorable story? Feel free to share it with your friends and family members!

Meet Wiley, The Adorable Dalmatian With A Heart-Shaped Nose And People Are In Love