How many of us would sell out everything and quit our jobs to follow our dreams? Well, I won’t. But, this couple, Matt and Jessica Johnson, left their respective jobs as an automobile sales manager and  billing specialist, sold out everything, brought a boat and set out on a mission to live their dream with their cat! They’ve been on the run since August 12, 2011, and have managed to visit 16 countries so far, including Cuba, Peru and Jamaica. Their cute little cat knows swimming and accompanies them everywhere!

“Our lives were the typical American Dream. Go to school, get married, buy a house, start a career. So far we’ve also left out the part of having 2.5 kids,” Johnsosns told the Daily Mail. “For too long we had spent all of our weekends in front of the TV without ever doing anything productive or enjoyable. We realised this needed to change.”

“It started in late summer of 2007 while on the shores of Lake Michigan.” 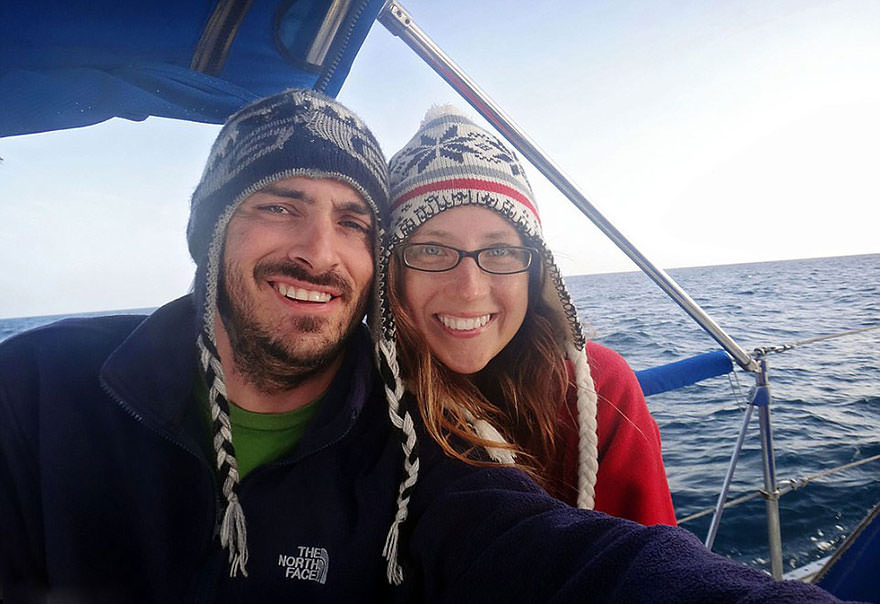 “Matt would look at the sailboats on the water and comment on how he’d like to try that someday.” 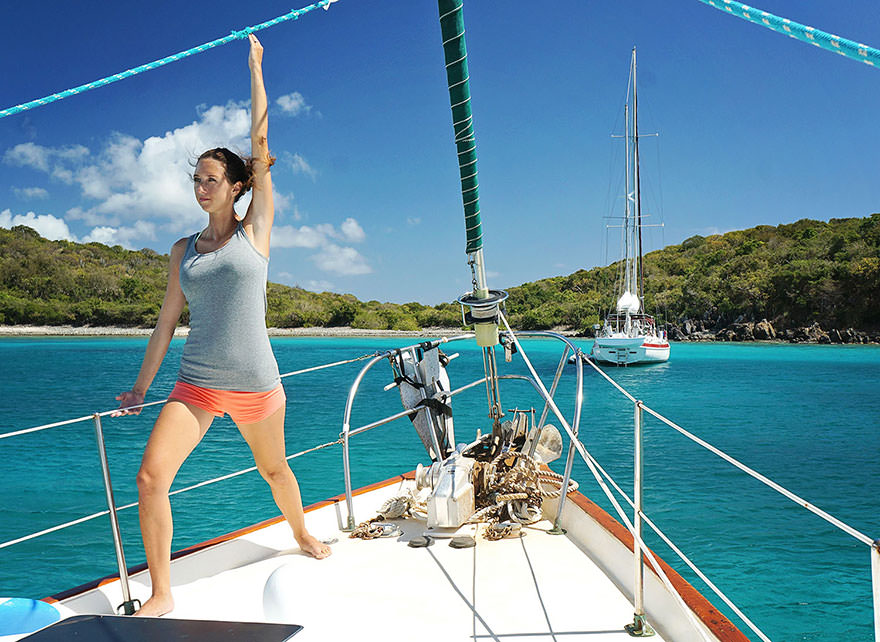 “He asked, ‘We can either get a piece of property or spend the money to get a sailboat, which do you think would be best?’” 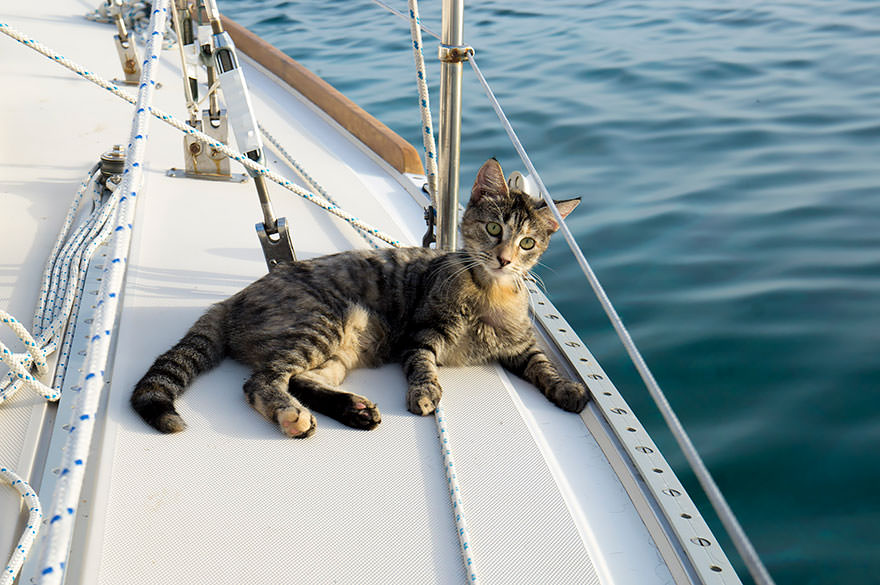 “Eventually we decided…that we would rather spend our summers on the water.” 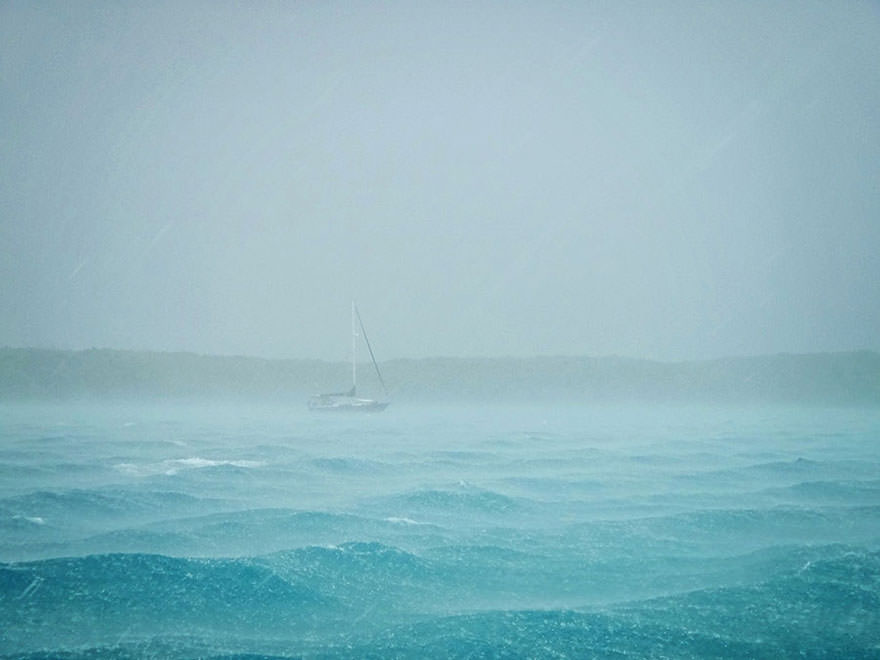 “We sold our house in June of 2011…when we realized we wanted to be gone for longer, possibly 4-5 years and go much further.” 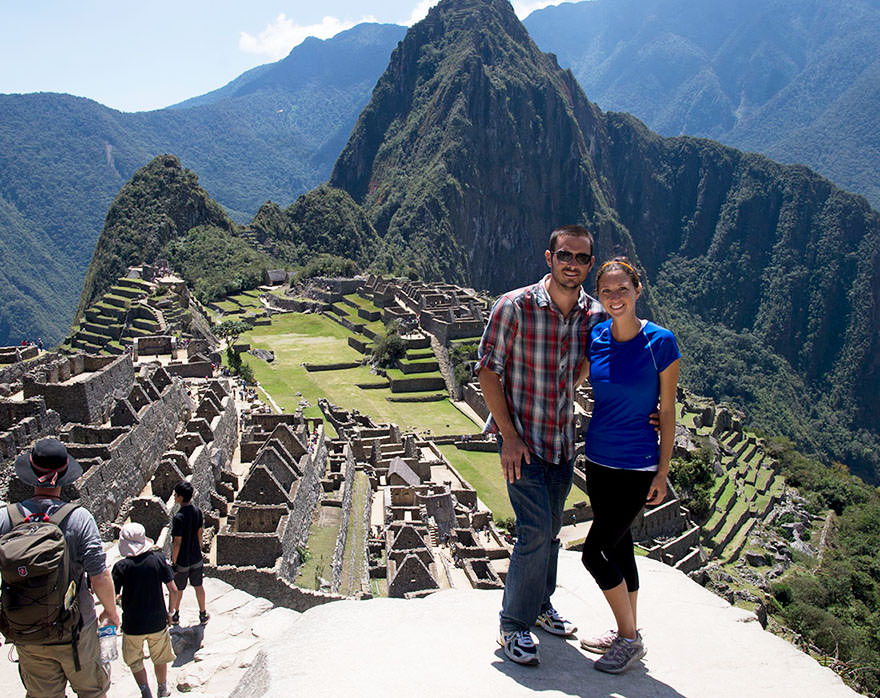 “In July we both quit our jobs, sold our cars, and were ready to start the cruising life.” 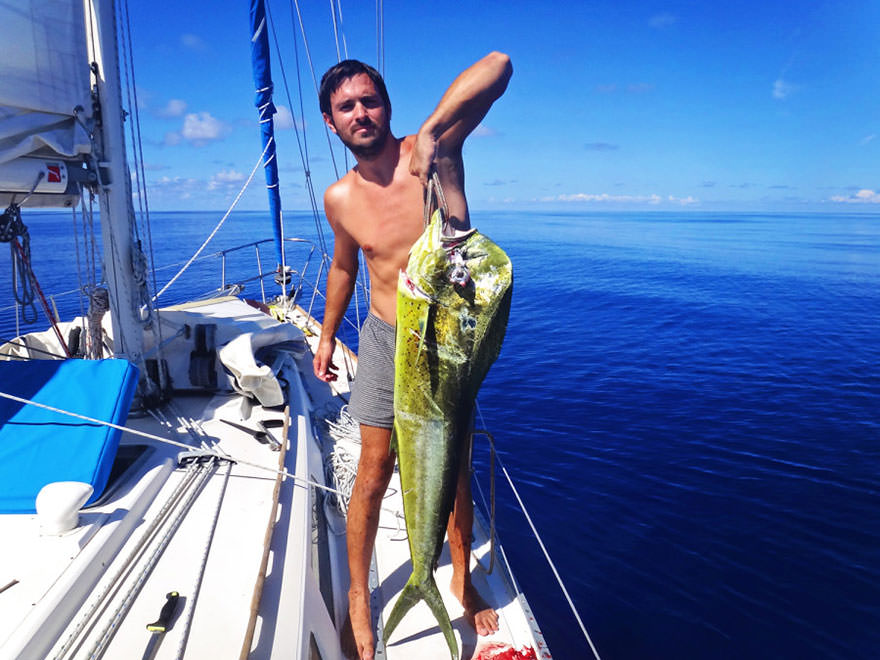 The couple adopted their cat, Georgie, in 2012. 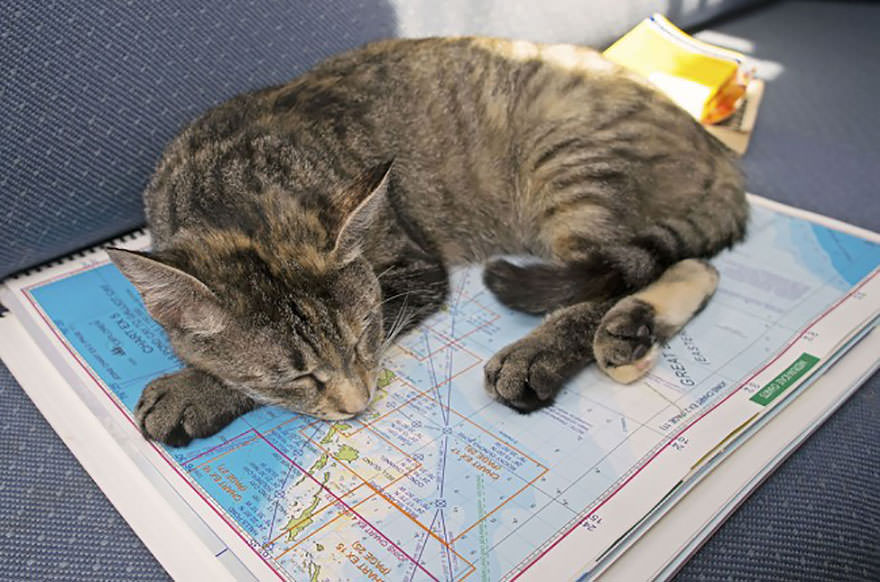 Georgie “does very well with the sailing and is more steady on her feet than we are.” 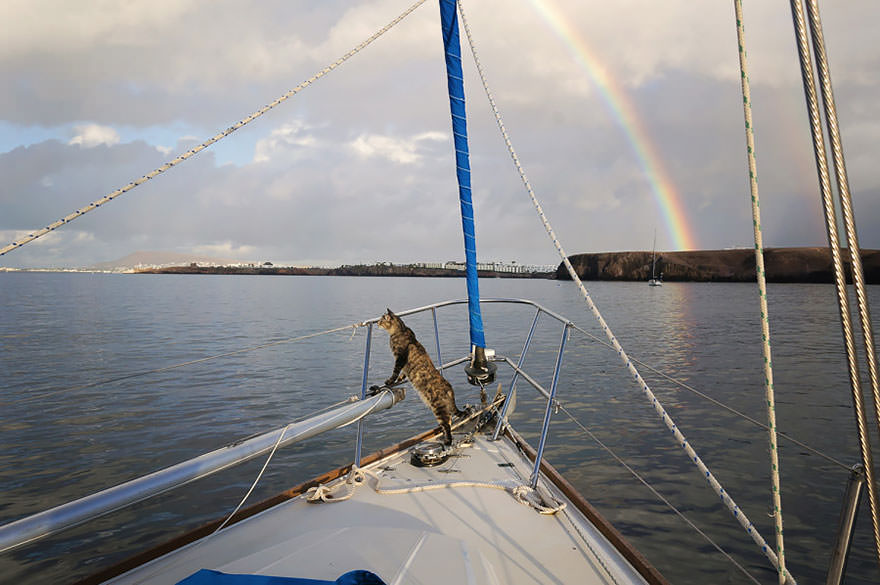 “I think that sailing the world has been great for our relationship.” 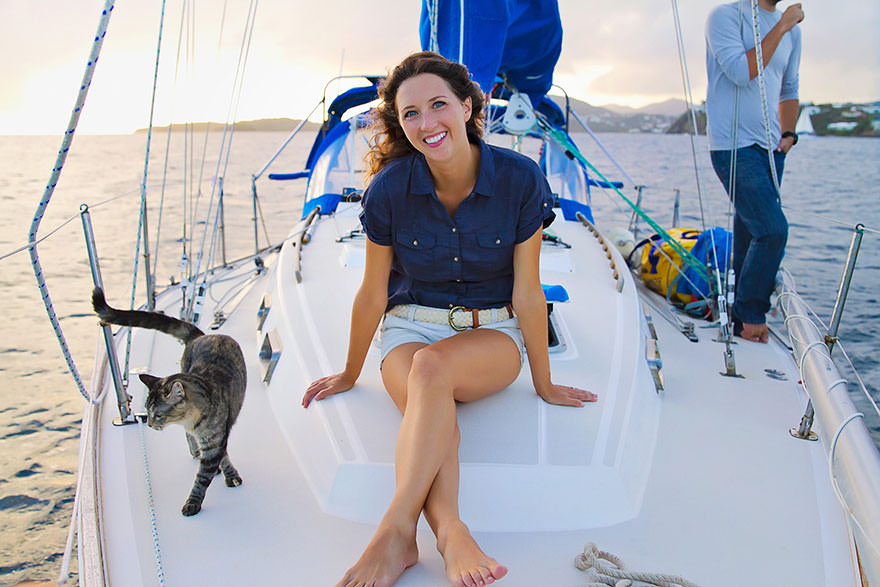 “There’s no walking away from an argument when one person gets mad at the other, you have to keep working together until the job is done.” 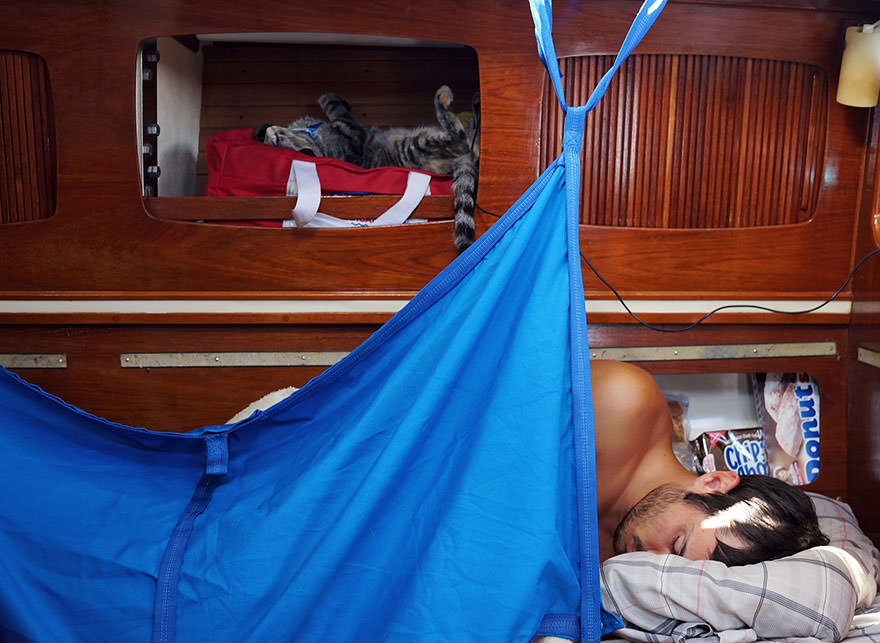 The cat “loves sitting on the deck and watching the fish over the side of the boat when we are at anchor.” 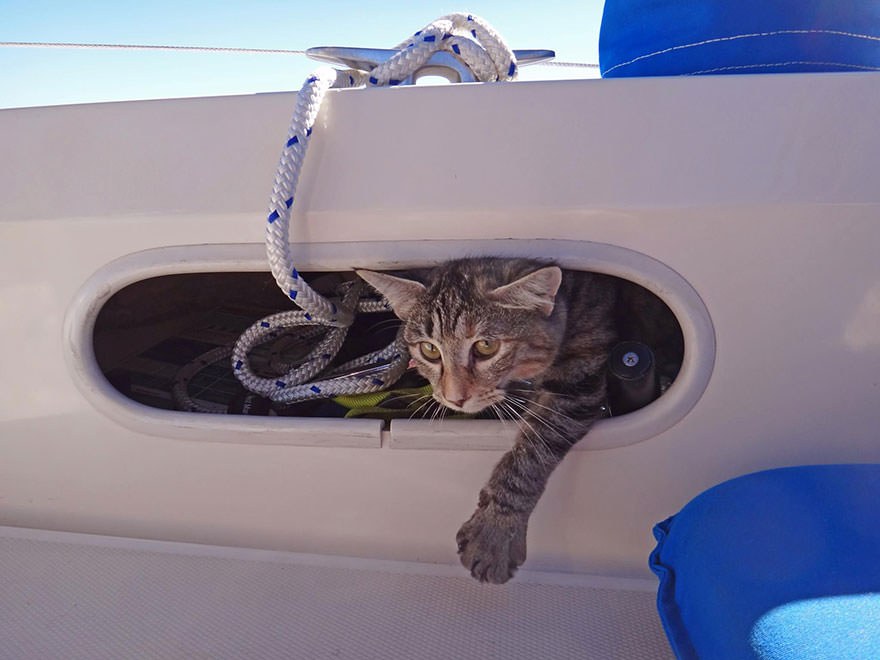 “We’d also been hearing stories from so many others that had been putting their dream on hold until retirement and for one reason or another until their dreams were no longer attainable.” 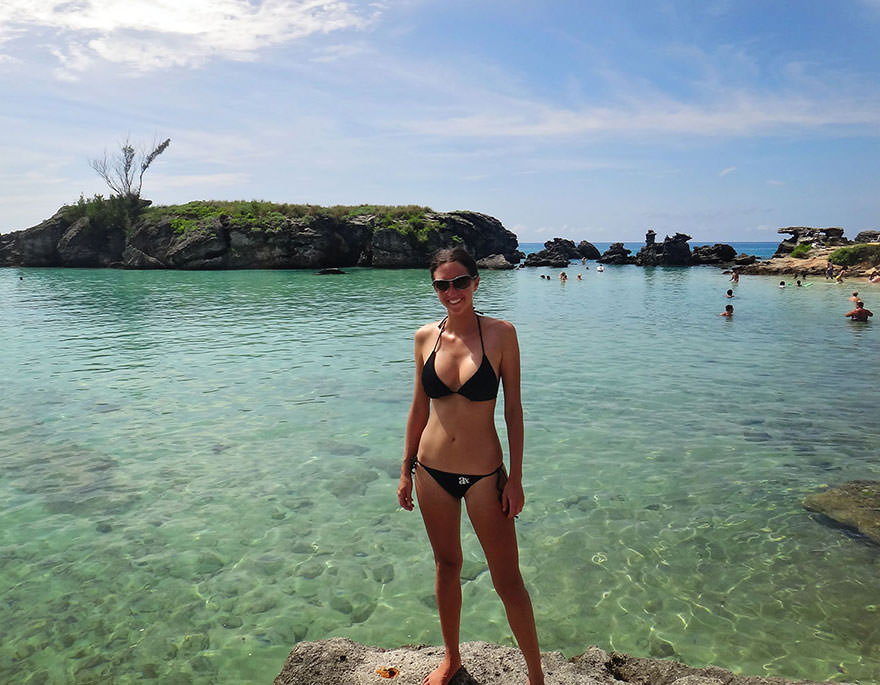 The couple “found out [Georgie] can swim when she jumped overboard in Grand Cayman.” 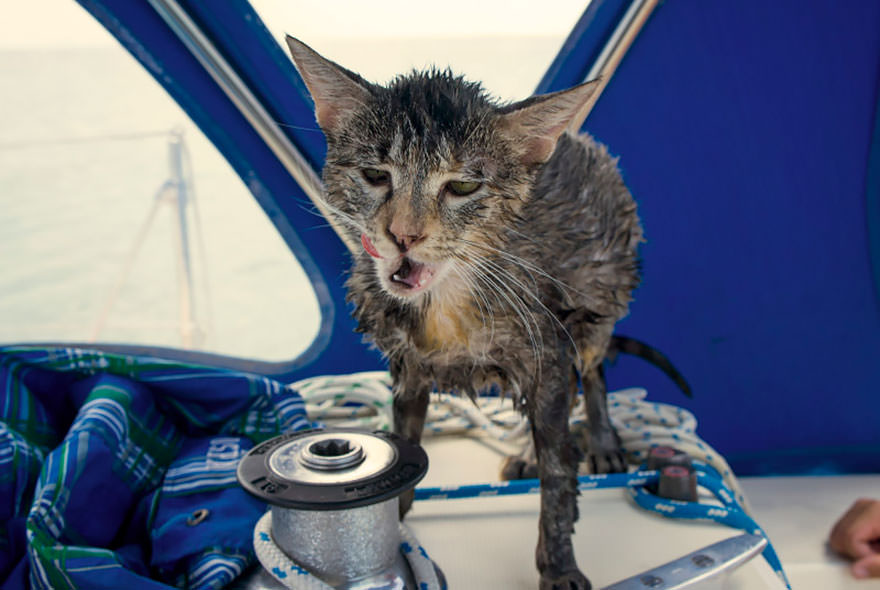 “She swam around the back of the boat and climbed up the ladder.” 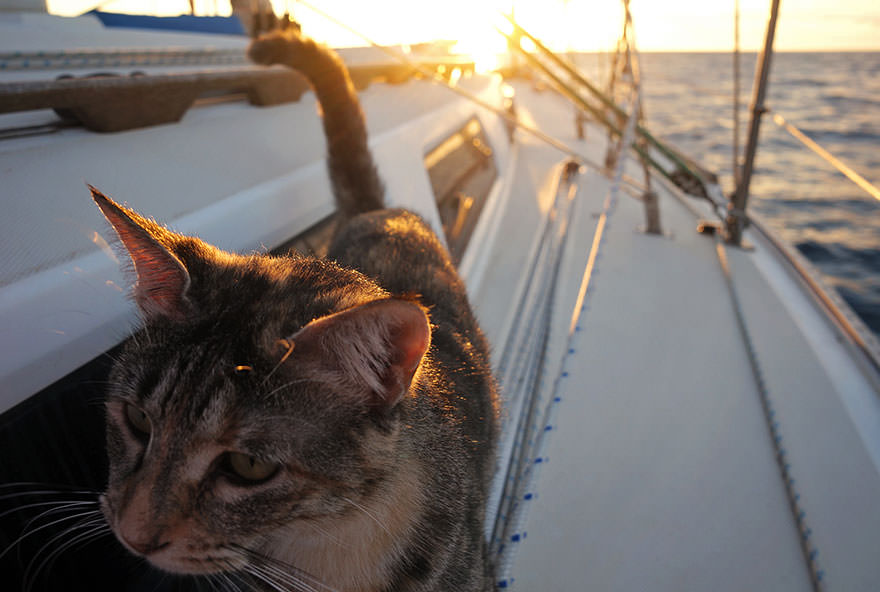 “Our lives were the typical American Dream. Go to school, get married, buy a house, start a career.” 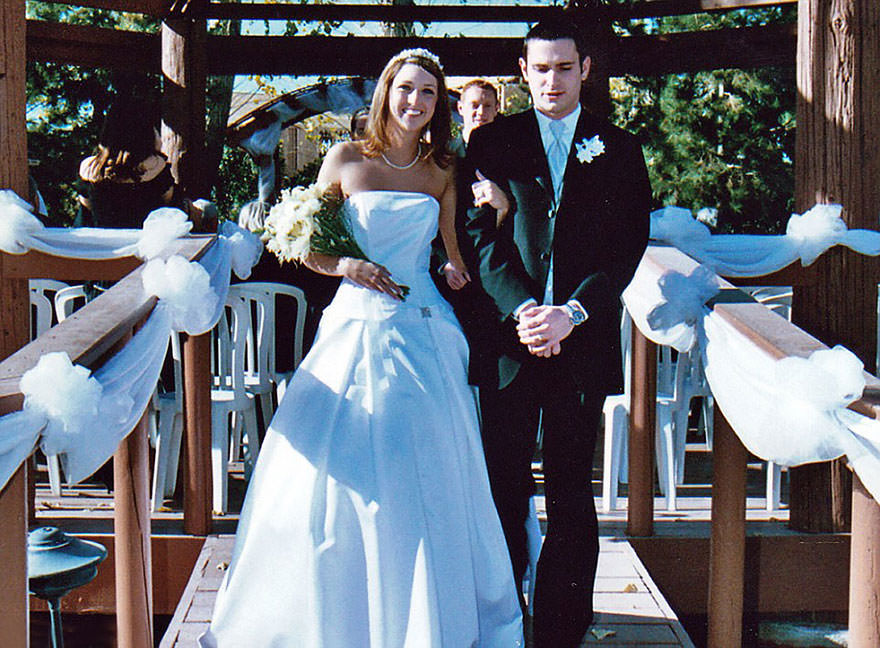 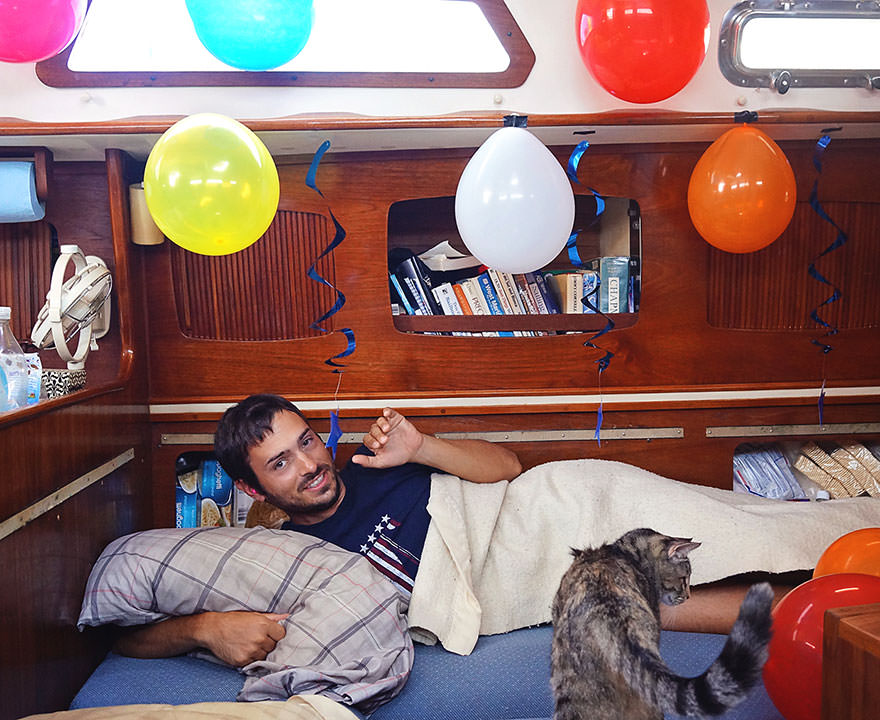 “For too long we had spent all of our weekends in front of the TV without ever doing anything productive or enjoyable.” 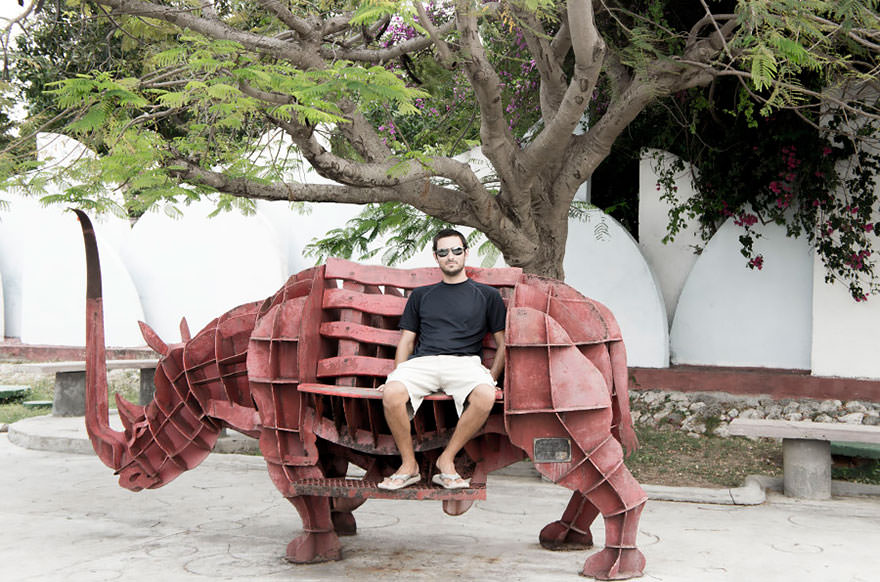 “We never wanted that to be us.” 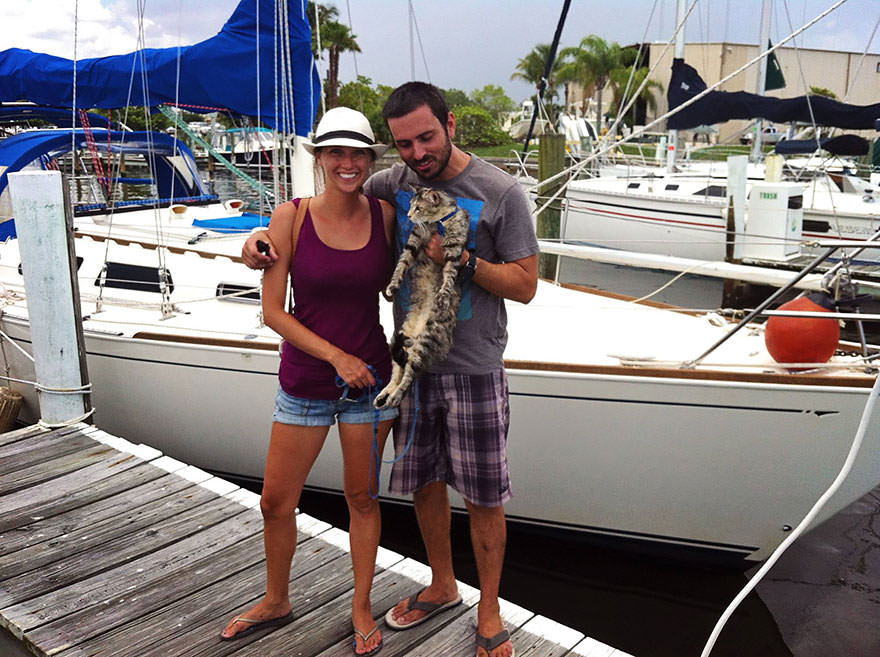 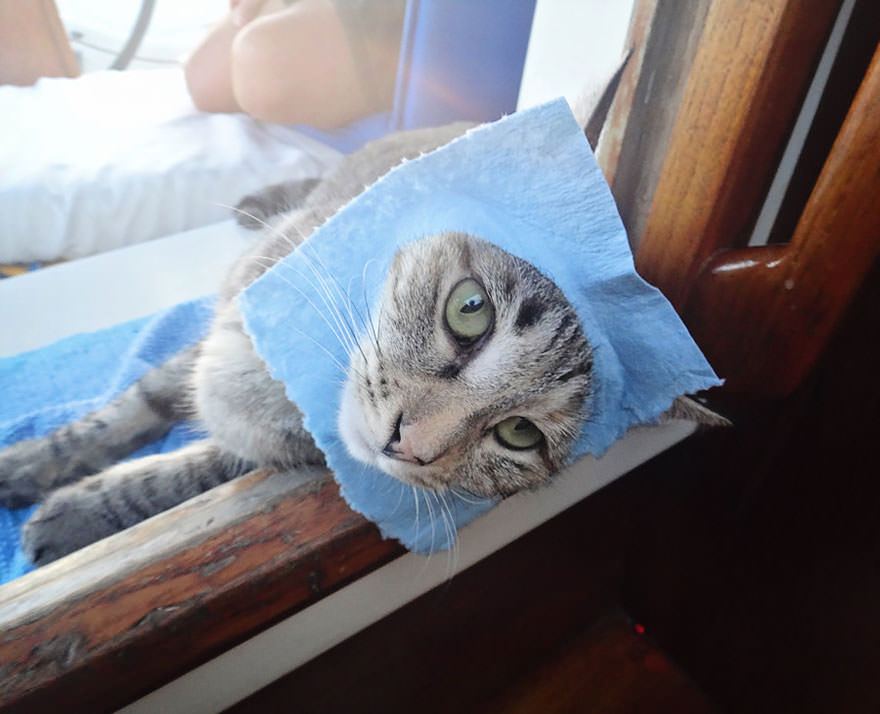 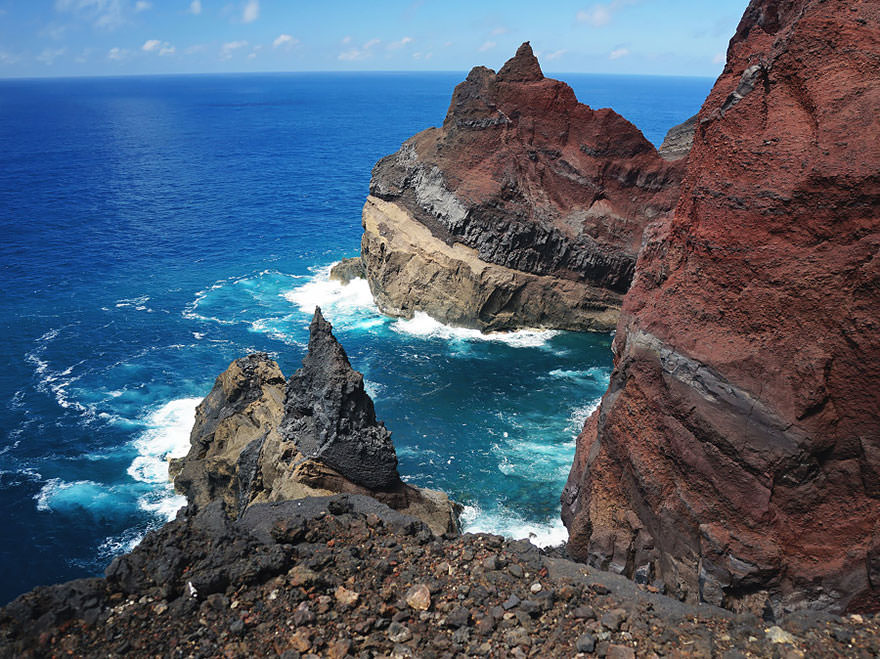 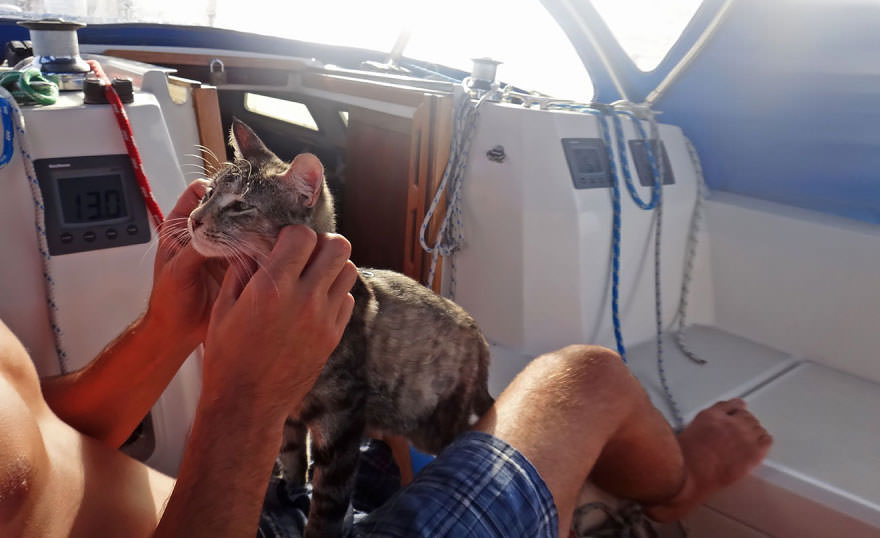 10+ Cats Who Are Struggling To Figure Out This World

10+ Hilarious Photos That Prove Cats Are The Biggest Assholes

10+ Hilarious Snapchat Stories That Show The Tricky Side Of Cats