A woman with cancer was reunited with her beloved dog who went missing over two years ago.

The woman named Kameroun Mares, was diagnosed with acute lymphoblastic leukemia back in 2013. At that time, she was depressed and broken. Thankfully, her life and her health had changed for the better after she got a husky puppy named Semper. The husky came into her life at a time when she needed love and companionship the most. According to Mares, the husky was named after Semper Fidelis, which means ‘Always Faithful’ in Latin. “He’s always been faithful to me,” Mares told The Dodo. They loved each other and formed a strong bond.

But sadly, Semper had gone missing while Mares was traveling to California for further medical treatments in 2016. When she returned, she and her roommate searched everywhere to find her beloved dog, but he had seemingly vanished into thin air. She continued to contact shelters in Florida, posted up fliers via pet sites, and walked the neighborhoods – nothing. “For a year, I continued searching while in California, posting up fliers via pet sites, calling 15 vet places around were I used to live over there about him, calling the humane societies about him, shelters,” Mares said. “[I] posted info about him on Facebook, lost dog forums, and pages and groups. Every day I waited for a phone call about someone finding him. His microchip is registered to me since he was 3 months [old] … yet I received nothing. I was worried sick about him, and missed him dearly.”

That’s when Mares reached out to Ana Campos, a private investigator, to help track down her beloved dog. “A year into this someone suggested she [Mares] check her AKC Reunite chip again. So she went to the humane society in May 2017 and they checked online … That is when she discovered that a year earlier, on April 11, 2016, a woman added her name to Semper’s chip,” Campos told The Dodo.

According to Campos, it was Mare’s roommate who sold Semper. “He was stolen and sold by her roommate 2 1/2 years ago,” Campos wrote on Facebook. “She was told he was lost on April 30, 2016. But on April 11, 2016 the buyer added their name to his AKC Reunite ‘registered chip’. They registered this registered chip on Petkey pets instead. Petkey pets did not bother to see if he was chipped already.” 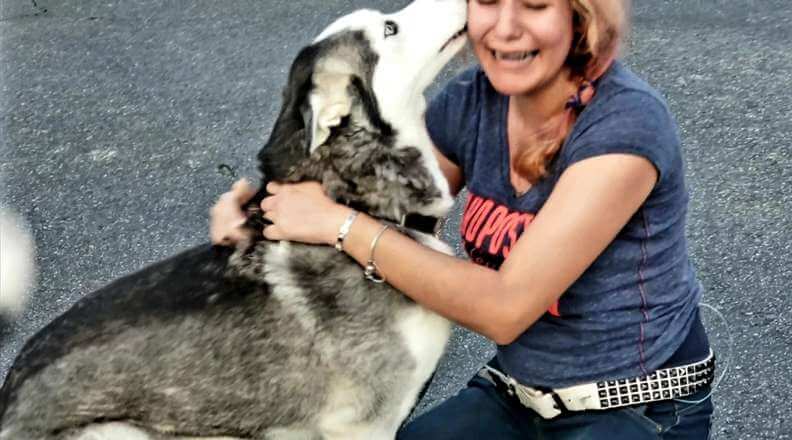 After fighting to get her dog back in court from the person who bought Semper online, the judge ruled in Kameroun’s favor and Semper was returned to Kameroun.

Watch the touching reunition in the video below:

Watch at your own risk of crying immediately. Here is the video and audio from Kameroun Mares reunion with her dog Semper today. ???????? and Ana Campos Investigations – South Florida.Please keep in mind Kameroun is just 26 years old. She was 23 when this began. For a young girl to have the wherewithal and courage to hire a private investigator and attorney is remarkable. Shame on Petkey pets for causing her to suffer and spend her savings on fighting for her dog back because of the role they played. He was stolen and sold by her roommate 2 1/2 years ago. She was told he was lost on April 30, 2016. But on April 11, 2016 the buyer added their name to his AKC Reunite "registered chip". They registered this registered chip on Petkey pets instead. Petkey pets did not bother to see if he was chipped already. A lawyer was retained. An ex-parte, pre judgment. writ of replevin and request for a 'break order' was filed. The Judge ruled in her favor and the Sheriff's office seized the dog this morning returning him to the person who always had superior ownership rights. It was a great day.( Ellen DeGeneres ) ( Good Morning America ) ( Live with Kelly and Ryan) ( Today Show ) ( Kathie Lee and Hoda ) ( The View ) ( Fox & Friends ) ( Morning Express with Robin Meade )

Finally, they were reunited after 2.5 years apart. Mares says that Semper still remembers the commands and tricks she taught him and he is settling back into his family very well. “I see him as an extension of myself and my heart,” Mares said. “I am glad I have him back in my arms.”

Love this touching story? Tell us your thoughts in the comments below and feel free to share it with your friends and family members!