Last week, Sheekilah Jones was waiting for her bus to work when she heard a knocking sound. She couldn’t find out the source of the sound, but soon she saw it.

“I heard knocking,” Jones told The Dodo. “[But] there was no one around.”

She tried to look around and was shocked when she spotted a black cat perched atop a handrail in front of a house. At first, she didn’t understand anything, but then she understood why.

As Jones look on, the feline stretched its tiny paw to reach up to the door’s knocker – as any human would. The cat then waited patiently for someone to answer. 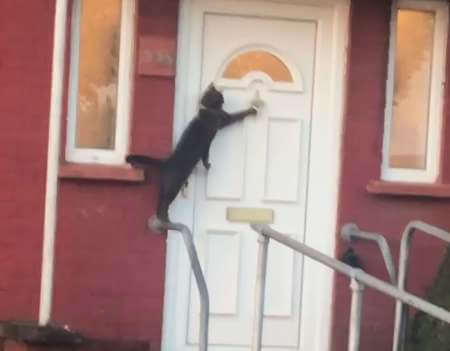 “I genuinely couldn’t believe what I was seeing,” Jones said.

She picked up her phone and took a video of the curious scene, lest no one else would believe it, either.

Unfortunately, Jones had to go before the cat’s owner opened the door to let him come inside. “I was tempted to go and knock a bit harder for him, but then my bus came,” she said. “So at that point, I got on the bus, still in shock.”

Soon after Sheekilah shared the video on Facebook, it has since gone viral with millions of views in just a few days. Many people have joked the cat had been out partying all night and returned home in the early morning.

Watch the viral video below!

Newcomer Finds A Letter Left By Previous Home Owners, Decides To Do What It Says

19 Things You’ll Understand If You Have A Bad Cat

20+ Cats Who Are Completely Shameless About Bad Things They Did