One day, Joshua Phillips and his friend were riding aboard a boat on Puget Sound off the coast of Washington when they came across another boat anchored in the water. They got closer and spotted a pair of enormous sea lions was on the small boat.

“It looked a little off, and we got closer and closer and realized there were two massive animals on board,” Phillips said in an interview with The Olympian newspaper. 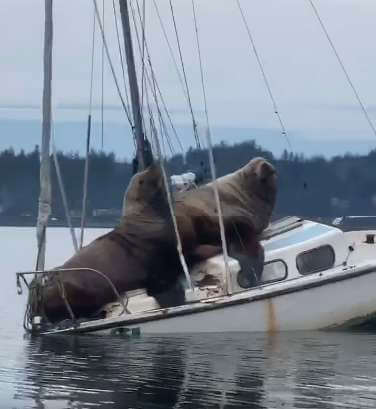 No one knows who owns the boat, how the pair came to be on it, and how long they hung out there, but there’s no denying that it is an awesome scene. Phillips didn’t believe in his eyes, so he captured the scene on video. “I’ve never seen anything like this,” he said.

The video of the large-and-in-charge sea lions aboard the small boat was posted on Instagram page of Spawn Fly Fish, Joshua’s company on Tuesday. It has gone viral and has been viewed more than a million times since.

Do you love this cute and funny video? Tell us your thoughts in comments and don’t forget to share it with your friends and family members!

20 Pet Owners Share The Most Captivating Pictures Of Their Pets