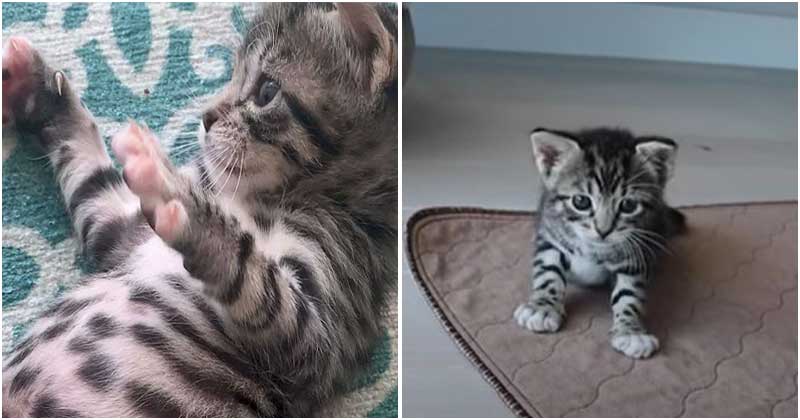 Meet Kelly, a tiny kitten who was found abandoned in a cardboard box in Brooklyn. She was taken to a local shelter with three kittens that were in her litter and four other kittens.

“The first couple of days were definitely a blur, but I had noticed very quickly that Kelly was really underweight. Everyone else was moving around a little bit, and she was not moving. She was also just not eating,” Jess Thoren, Kelly’s foster mom said.

Jess did everything she could to make sure Kelly was growing. At first, Kelly was timid sometimes, so she often stayed in her bed and just watched others play. But after that, she tried to catch up to everyone else. And she was like, “Oh, do I wanna join.”

Jess put Kelly with Zach a lot because he was closest to her in size. She hopes that Zach the wild cat will help Kelly become stronger and much more confident. Thankfully, everything worked, and Kelly picked some of wild personalities from Zach.

Zach and Kelly become best friends and are inseparable, so they will be adopted together. “I’m really going to miss her, but I’m also really excited to see her in her new life because she really deserves it. She’s fought so hard for it,” Jess said.

Kelly was so shy and timid, but now she is big enough to play with her siblings. If you want to revisit Kelly’s journey and meet Jess’ other foster kittens, you can follow them on Instagram.

What do you think about this story? Let us know your thoughts in the comments below! Be sure to share this post with your friends and family members!

Stray Kitten Walks Up To Dog Walker, Meowing Until She Brings Her Home

17-year-old Cat Befriends 85-year-old Stranger And Turns Her Into A Kid Again..

These Rescue Kittens Caught In Mid-Pounce