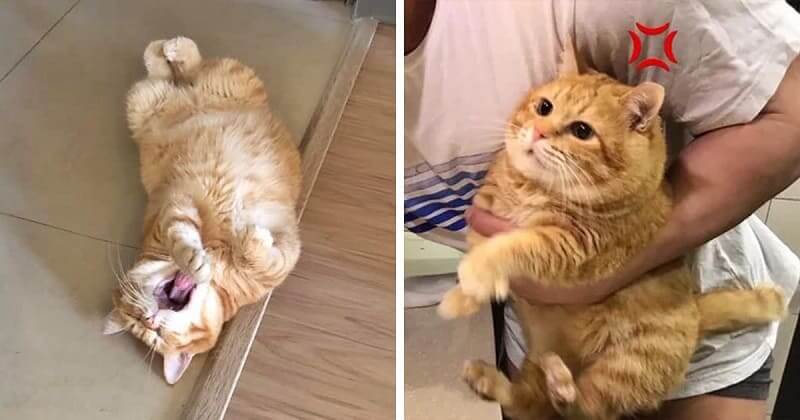 Meet Fat Xiang or Fat “Lucky Guy”, a red tabby munchkin who has been going viral recently for his nearly constant state of sleep in adorable and silly ways only cats can do. Back in 2016, Fat Xiang was a stray cat who was saved and adopted by his now owner, Jessie, a dentist from Taiwan. He was found injured due to fighting with some other strays on the streets. In an interview with Bored Panda, his owner Jessie shared: “I adopted Xiang in 2016. He was a stray cat and all of the neighbors liked him. Sadly, he would often get hurt by other stray cats who fought with him, and he was small and not strong enough to defend himself. So, I adopted him,” said Jessie. The cute ginger cat loves to sleep so much that he’s been dubbed “the sleepy influencer”. He got this nickname because he has 29,000 followers on Facebook. The munchkin looks like he can catch some shut-eye anytime and anywhere. Although he spends his whole day sleeping, he is constantly tired. For this reason, Jessie took him to the veterinary, where he was diagnosed with FIV, the cat version of HIV. “He sleeps about 16-20 hours per day. I can even cut Xiang’s nails when he’s sleeping. I was worried if he’s sick and took him to the clinic,” elaborated Jessie. “The vet checked his blood and X-ray, and said everything is normal, apart from his FIV. He suspects that Xiang now sleeps a lot more because he was constantly nervous in the street.” Xiang now lives happily with his owner and another cat named Shuai (meaning “Handsome”) in Taiwan. He continued: “Xiang gets things like the flu, rhinitis, and eye inflammation easily due to FIV. But he’s still enjoying his life with Shuai and us. He’s always playing with Shuai – since Xiang’s leg are shorter, it’s funny to see him fight with Shuai.” “Their fan-page is called “Run! Xiang” because I hope he is happy and vibrant. Fans always joked that I’m a liar because Xiang’s always sleeping [and not actually running].” When asked whether he was afraid to adopt cats with FIV and other risk factors (such as old age), Jessie shared: “I think life and death are natural among animals, all of them will eventually die – but if we can let them have a loving home and have them leave us within that comfort, I can bear it.” He continued: “The big difference between humans and other animals is that, whether it be financial or emotional frustration, there will always be opportunities, choices, and it will slowly get better for us humans. But, for the animal, the owner is their entire world.” If you love Fat Xiang, you can follow him on Facebook page to check out more his adorable photos and videos. But before you go, please let us know your thoughts on this cute cat in the comments section below. Be sure to share this post with your friends and family members!

After Truck Driver Finds Stray Kitten On Road She Falls Asleep, And He Doesn’t Have The Heart To Wake Her

Sphynx Kitty Looks Like A Bat Due To Rare Neurological Condition

10+ Camouflaged Cats That Win At Hide And Seek