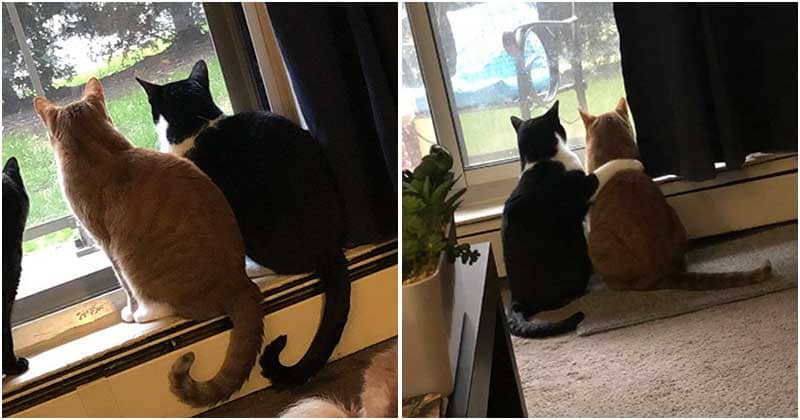 With four mischievous rescue cats and a big dog, Emma Patricia’s house is rarely quiet. The animals all love to play and wrestle with each other, especially two cats Norman and Noah. They have a very special relationship. Not only are they brothers, but they are also best friends. “My little sister actually found Noah when she was on a canoe trip. He was down on the riverbed and I came and got him and he never left,” Patricia told The Dodo. “They are brothers and very much act like it.” Emma shared the two have been close since Noah joined the family. Norman considers Noah as his adoptive brother and always takes care of him. “They love to be close to one another,” Patricia said. “Generally, where you find one, the other is close by.”

One Saturday morning, Patricia was having breakfast and reading a book when a storm rolled through town. She glanced up to look out the window and saw Noah and Norman wrestling on the floor. But a moment later, when it started to storm, they sat side-by-side and watched the rain together, with Norman seemingly comforting Noah. “The boys love to sit and watch the rain in the window,” Patricia said. “I didn’t think anything of it but then I looked over a few minutes later, and Norman had his arm around Noah and they were just sitting there like that watching the storm.” Patricia managed to capture a quick photo of the protective bond between the kitty brothers and shared it on social media. When she posted it to Twitter, she never expected that it would have gone viral.

She was glad as the cutest moment of them together had brought so many people joy. “I’m so glad everyone thinks Norman and Noah are just as cute as I do!!! They are both rescues and encourage you to adopt not shop!!! They also think you should wear your mask, support BLM and the LGBT+ community and buy from small businesses,” she replied to those fawning over the photo. It’s not the first time Norman and Noah have been so sweet and kind to one another, but the act of supporting each other in such a sweet way still surprised Patricia.

“They will hug each other like that to groom one another,” Patricia said. “But to just sit like little thunder buddies that way — never!” And when Noah got worried over a recent storm, Norman was there to comfort Noah and make sure he wasn’t afraid. Patricia even reported that they stayed like that for several minutes. How sweet are these two boys? Is there anything cuter than animal friendship? Tell us your thoughts in the comments below! Please share to pass on this story to your friends and your family members.

10+ Hilarious Photos That Prove Cats Are The Biggest Assholes

Mother Dog Raises Tiny Abandoned Kitten As One Of Her Puppies

10+ Poodle Cats Will Capture Your Heart Right Away