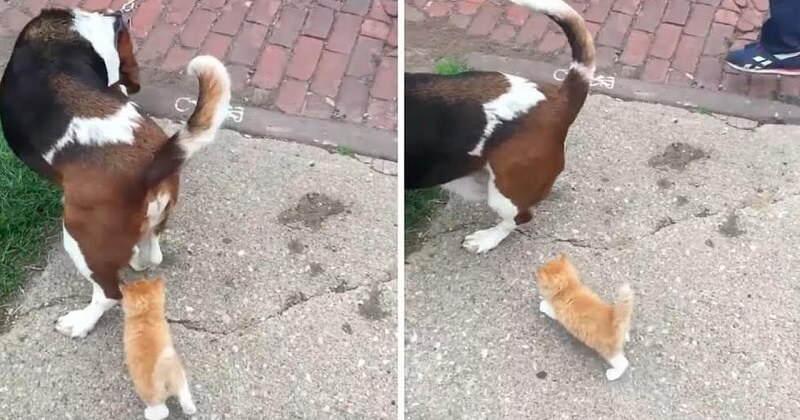 In fact, stray cats are often scared of people and will find their ways to hide and avoid anyone who wants to approach them. However, some stray cats yearn for human interaction. They even decide to “adopt” a stranger as their new owners without suspecting.

Basically, these fuzzy friends can show up on your door or backyard asking for food, shelter, and attention. So, what do you do if you happen to be the target? That was what happened to a man named Jon Nienaber. He was chosen and adopted by a stray kitten. One afternoon in May 2016, Jon was walking his dog when he saw a tiny stray kitten wandering in the streets. Everything was usual until he realized that the kitten was following him and his dog.

He called his wife Leslie Nienaber and told her about the stray who joined them looking for some attention. Leslie immediately went to buy some cat food and fed the little kitten. She said the feline was so small that it could easily fit in her palm.

Leslie said the Cleveland, OH. area is full of stray cats, so it is not surprising to see stray cats wandering in the streets. When she saw the kitten following her husband and their basset hound, she quickly captured the sweet moments. It was clear that the kitty was determined to find a family that will take him in. He followed the couple even after they began to walk away. He refused to give up and kept on following them. That was when Leslie turned to Jon and said they needed to adopt him and take care of him.

Now, the kitten is happy to have a new home and beloved owners that he deserves.

Do you love this story? Let us know your thoughts in the comments below! Be sure to share this post with your friends and family members!