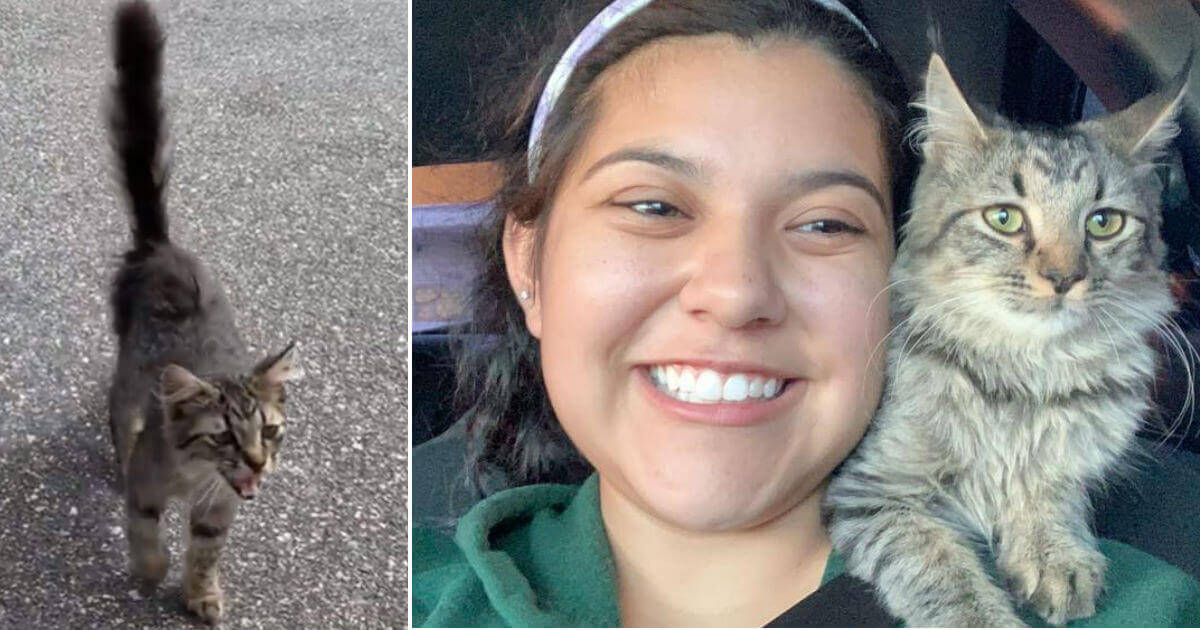 A dog walker named Kiara from Orlando, Florida was out walking her dog when a stray cat approached them. She continued on her walk and spotted the kitty following closely behind. The tiny stray was not afraid of the big dog, was meowing for attention. The poor kitten meowed as loud as she could to make sure Kiara noticed her. She was covered in oil and grease, and she also had fleas. Kiara asked a neighbor nearby and learned that the kitten didn’t belong to anyone and had been roaming the streets all her life. Many people spotted her, but they had passed her by and no one had brought her home with them. “The whole time, I was holding her and she was purring away. As the woman continued to tell me her story, I knew she’d be mine,” Kiara said. It was clear that the kitten had already chosen Kiara, and so, Kiara decided to adopt her and give her a new name – Hope. After Kiara finished her dog-walking shift, she and her boyfriend, Chris came to the pet store to pick up supplies for the kitten. Once they got home, they gave her a bath to remove all the dirt and grime. After that, Kiara fed Hope and then carried her to her new bed. “I’ll never forget the first time she kneaded and she was so comfy in her bed. It was probably the first secure thing she’d ever had. She now had a reliable source of food, love, comfort, and toys,” Kiara said. At around three and a half months old, Hope only weighed 2.9 pounds. However, she didn’t have any other health issues, and she was always in good spirits. She seems to know that she has a good owner who loves her more than anything. Kiara and her boyfriend gave Hope plenty of food to help her gain weight. She has gotten bigger and stronger since the day she was rescued. She is now five-and-a-half months old, and she has gained weight.

Kiara shares photos of Hope growing up on her Instagram page. If you want to learn more about Hope, check out her Instagram.

If You Think Your Cat Is Big, You Should See These Huge Maine Coon Cats

The Cat Sniffed Owner’s Socks Then His Reaction Cracked Internet Up!!

22 Photos Of Shameless Cats That Break The Mold