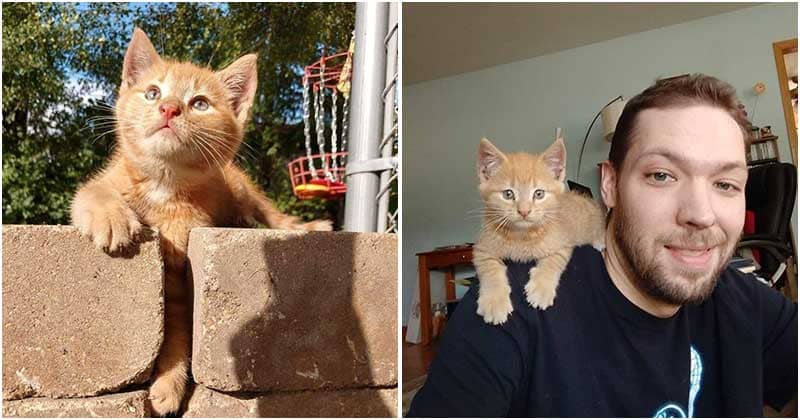 Michael Day is a talented artist and an animal lover from Chicago. He often rescues poor animals and helps them find forever homes. One day, he was outside his home working on his painting when he spotted a little kitten sitting on his garden blocks, curiously watching him. He had rescued many stray cats and dogs from his neighborhood, but this was the first time he was approached by a street cat. “I figured he wanted some food and water so I gave him both. We had a cat so we had extra food,” Michael said. Michael continued to paint and let the kitten enjoy his meal. However, when he looked for him again, the kitten was already disappeared. He couldn’t stop thinking about the kitten, so he left some food and water outside that night. The next evening, Michael was surprised when the ginger kitten came back to him. He walked up to Michael, cuddled, and gave him sweet hugs. “He came right up to me, let me pick him up and hold him. He even sat on my shoulder,” Michael said. “That was when I knew he chose me.” Michael and his family couldn’t resist the kitten, so they decided to adopt him and named him Oliver Gibbs Malley (aka O’Malley). That night, the kitten was so happy that he couldn’t stop cuddling with his beloved humans at his new home. The kitten was taken to the vet and was estimated to be around three months old. Despite being very little, he was healthy and playful. “He’s so curious and investigative. If you leave something open, he’ll try to get into it,” Michael added. “He’s been the most rambunctious thing, running through the house, jumping on everything.”. We are happy to know that the ginger boy found his forever home and his loving owner that he deserves. “He’s a good boy, and I wouldn’t ask for a different pet,” Michael said.

Love this story? Feel free to share it with your friends and family members and don’t forget to let us know your thoughts in the comments below!

This Cat Has Been Waiting In Shelter For More Than 400 Days, So The Staff Came Up With A Plan

10+ Cats Who Simply Forgot How To Cat