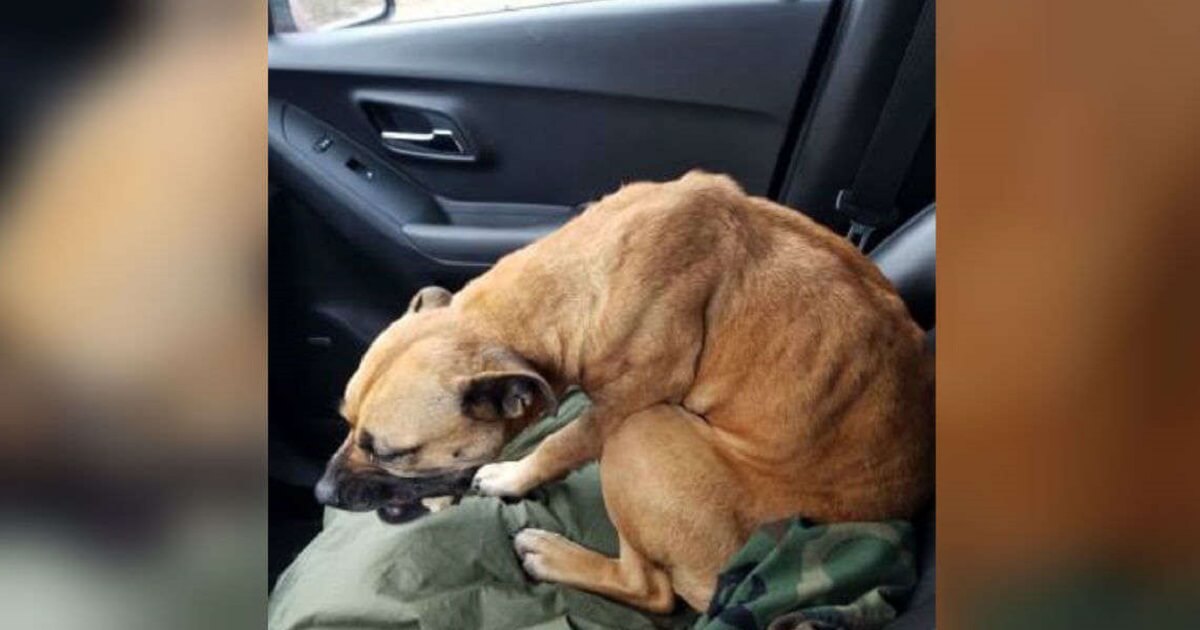 On his way home to Missouri after a fishing trip in Arkansas, a man named Bill pulled into a rest stop to throw away some trash and use the bathroom. He thought that he would only be gone for a minute, so he left the car running with the door open. Nevertheless, when he came back to the car, he was shocked to spot a dog sitting in the front passenger seat. This malnourished stray dog was wandering at the rest stop when saw the open car door, so she decided to hop into the passenger seat. The poor dog was just skin and bones and she clearly needed something to eat. Therefore, Bill quickly offered her the only food he had in his car, a Rice Krispie Treat and she gratefully gobbled it up. The pup was so sweet, that Bill couldn’t leave her there just like that, so he decided to do something to help her. Luckily, Bill and his wife are dog lovers, and they have a tendency to foster stray animals. So, Bill sent his wife a picture of his new friend and asked if he could bring her home. Thankfully, Angela agreed with his decision to keep the dog. “I asked him what our new dog’s name was,” Angela Shaver told The Dodo. “We decided to call her River because of where she found him.” Angela and her son came out to greet their new dog as soon as she arrived home. The family already had three rescue dogs and one rescue cat and were more than happy to add a new member. They introduced River to all dog siblings one-by-one, and they were happy to see that River got along with everyone. “Once they all decided she was OK, he [Bill] brought her in for a bath,” Shaver said. “She was covered in mud, blood, and ticks. After she was dried off and some ticks picked off, she got a good meal. Bill made her a bed on the floor in our room next to the space heater. She slept there all night.” Bill made her an appointment at the vet the next day to get checked. The vets discovered that she had tapeworms, heartworms, and wounds on her neck and face. But after she was prescribed medication and was all cleaned up, she started feeling better. River the dog is now settling in extremely well with her new family and is satisfied with her new life. After whatever she’d been through, it seemed she was just grateful to finally be safe and have a forever home.

Please share this story with your friends and family!