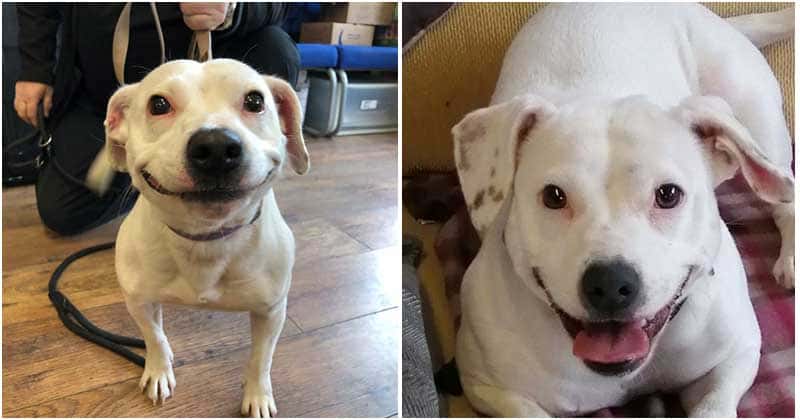 When it comes to Staffordshire Bull Terrier dog breed, most people think they are a scary and dangerous breed that should not be kept as pets. For this reason, they have the sad tag of “most unwanted dog” and often take a while to find a forever home. But this wasn’t the case for Sybil, who was adopted only a couple of days after she arrived at a rescue charity, and it’s all because of her brilliant smile. Sybil, formerly known as Lily, was brought to All Dogs Matter in north London last week after a dog warden found her wandering the streets. When she came to the shelter, everyone first thought they might have real trouble trying to rehome her as that’s the usual case with Staffordshires. Despite the stereotypes sometimes associated with her breed, she quickly captured the hearts of the staff at the shelter. One of them decided to take a picture of her and then shared it on Twitter. Not surprisingly, Sybil went viral and quickly won hundreds of fans for her fabulous grin. Soon the shelter was flooded with messages from people sharing their love for the pup. Some even said that they’d like to adopt her. Finally, she found her forever home with Frankie Murphy, an animal lover who contacted the charity to say she wanted her. “We saw her lovely little smile and couldn’t resist,” said Frankie. “Even though we knew she had a lot of interest from the Twitter post, we got in contact with the charity in hopes that she was still available. When we went to visit her, we fell in love with her straight away. We were sitting there in the waiting room, and she walked in with her foster owner, and she was just so excited to see us.” “She’s so good,” Frankie said. “She follows my Dad around like a little shadow, and she doesn’t bark at all. My neighbors didn’t even know we had a new dog because she’s been so quiet. She is so intelligent too, she has managed to open our back door. She’s not tall enough to reach the handle but she can push it with her nose and open it.”

We believe that all dogs deserve to be treated with love, caring, and respect. If you also agree with us, please share this post with everyone to spread this message across the world!