No wonder dogs are the most popular pet in the world. They are known as human’s best friend who served and guarded human for many generations. And for the staff at gas station in Tamaulipas, Mexico, the loyalty of dogs became beautifully apparent after he helped a staff who was being robbed by armed felons. The brave dog named Randy, he was a stray dog and was adopted by the staff at the gas station two years ago. The stray boy was spotted when wandering around near the gas station, looking thin and scared. So, the gas station employees decided to adopt him and gave him a forever home. Recently, two armed robbers arrived at the station and ordered the attendant on duty to open up the office where money is kept. They began beating the worker, throwing punches and pushing him to the floor. 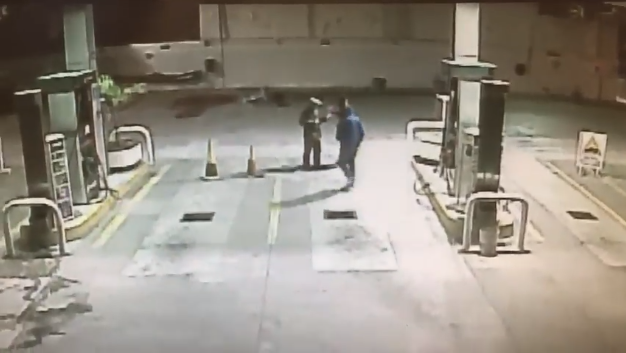 Thankfully, Randy was snoozing in the station’s warehouse suddenly woke up and came rushing in to the drive robbers away and protect the employee from violent armed robbers. If it weren’t for Randy, who knows how things would have ended. It would be wonderful if there were more rescued puppies at other gas stations and other stores. We hope more places are inspired to find room for stray dogs like Randy.

No more proof is needed that dogs are amazing – but this is a clip of a heroic dog showing how brave they can be. Don’t forget to share with your friends and your family!