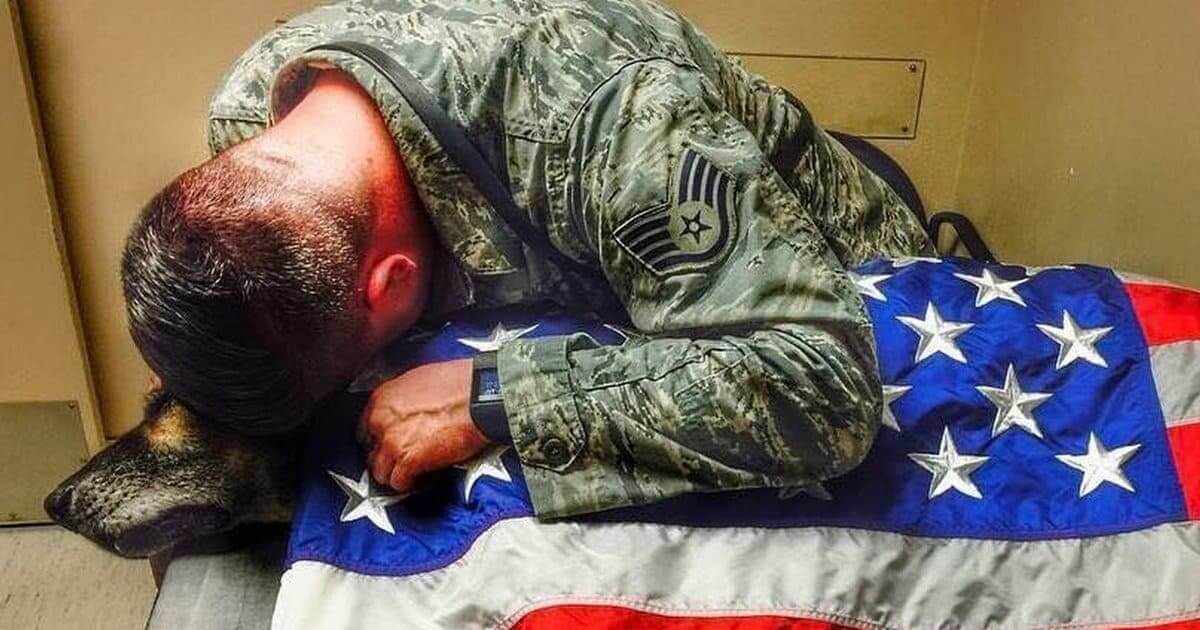 Sargeant Kyle Smilth and his partner, a German Shepherd named Bodza met together while serving in the US Air Force. Bodza had worked as a bomb detector since 2006, and he helped save human lives by sniffing bombs. Until 2012, Smith started working with Bodza and the two quickly formed a strong friendship. “I loved working with him because he taught me a lot – patience as a young handler, and how to understand that this job isn’t just about you,” Smith told The Dodo. Over the years, the two did many missions together and when the day came for Bodza to retire, Sargeant Smith decided to adopt him. “I took him home the same day,” he said. “He was even more loyal at home,” Smith said. “He followed me around everywhere. He would lay his head down flush with the bed and tell me good night, every night.”

Bodza’s retirement was a happy time, until he was diagnosed with degenerative myelopathy in the summer of 2016, an incurable which disease affecting a dog’s spinal cord. “His hind limbs lost their use and he could barely stand up anymore, much less walk,” Smith said. “He couldn’t handle the stress on his body and using the restroom was a task.”

Smith was faced with a situation that no pet owner ever wants to make – to put Bodza down. Kyle and nine of his co-workers took Bodza to the Fort Bliss Vet Clinic in El Paso, Texas. They placed him on a blanket and he passed away peacefully in the arms of his owner. “I was holding Bodza as he passed,” Smith said. “It was a rush of so many things. It was just overwhelming.” Thankfully, his co-workers were there to support him. “They let me sob like a baby,” Smith said. “They pat me on the back and let me know it was going to be all right. My boss immediately went and grabbed a flag, and draped it over him and let me have a final moment.” Bodza crossed the rainbow, but he seemed happy in his last moments. “He had a smile on his face when he was getting put to sleep,” Smith said. “I will never forget how loyal he was,” Smith said. “He was selfless – more than any human I’ve ever known. He’s done so much for next to nothing and did it with a smile. I miss him every day.”

Thank you so much, Bodza! Rest in peace.

Please share to celebrate the bond between dogs and humans!