Chester is a sweet and friendly dog who loves nothing more than to play fetch. And while most people are happy to play with him, there is a guy refused his enthusiastic invitations. The adorable pup has never met someone who didn’t like this game, so he was destined for disappointment and couldn’t understand why the guy didn’t want to play with him. As it turns out, the rude guy isn’t really a person at all, it is a wooden statue.

This story happened when Chester was out for a stroll through the woods with his siblings and his owner, Debby Taylor. As they walked the trail, they saw a wooden statue of a seated man. All the pups seemed to understand that the “man” was a statue except for Chester.

“We had already passed the statue, then realized Chester wasn’t with us,” Debby Taylor, the dog’s owner, told The Dodo. “We looked back and there he was.” 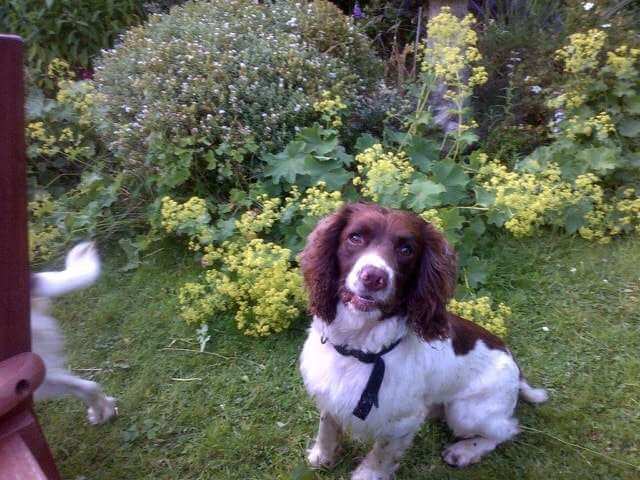 Chester saw the man sitting in the woods as a potential playmate. So, he found a tree branch and placed it at the statue’s feet. His tail wagged furiously as he waited for his new pal to play fetch with him. Sadly, this statue couldn’t pick the stick up and throw it.

Chester kept picking up the stick and tossing it at the gentleman’s feet, but the “guy” didn’t move. Despite Chester’s enthusiasm, his request went unacknowledged. He was a bit confused as to why this man didn’t want to play fetch. Normally, strangers will accept his invitations to play.

Watch the funny moment on the video below:

“We call him Mr. Sociable,” Taylor said. “He will do that to anybody, and has been known to accost people for ages if he thinks they will throw a ball or stick for him.”

Finally, the sweet dog picked up his stick and gave up. He might think that was a very rude man. But we hope that the rude rejection from the wooden man that day won’t keep Chester from trying.

We can’t stop laughing at this adorably determined dog. If you love this video, please share it with your friends to make their day better.