In 2016, four shelter dogs Frida, Costela, Mel and Isabelle have taken the world of tennis by storm at the Brazil Open tournament in Sao Paulo. The tournament organisers have replaced the ballboys and ballgirls with dogs. The dogs won everyone’s heart, and soon were adopted by families. One of the adopted dogs was even names Serena after the tennis icon Serena Williams, which is so cute.

This brilliant yearly initiative comes from Premier Pet, a pet-food company which also supports pet adoption and subsidies the feeding of countless dogs and cats. The only issue that has arose so far is that the dogs refuse to give the ball back sometimes. But then again, the players are unlikely to complain much over it.

In 2018, six shelter dogs – Cindy, Nanda, Pretinha, Mia, Arlete and Ovelha were given this prestigious opportunity; fetching balls during warm ups on the days of both the semifinal and the final. These sporty dogs were all between the ages of four and ten, with plenty of fun and affection to bring to the right home. The dogs even wear sweatbands on their paws and scarves around their neck, they are doing their job with utmost aplomb. Therefore, given how excited they look, it would be a dream career for many puppers to work as a ball boy or girl at a professional tennis tournament.

Here is a video showing the dogs in action:

These sporty dogs – Cindy, Nanda, Pretinha, Mia, Arlete and Ovelha were given this prestigious opportunity. 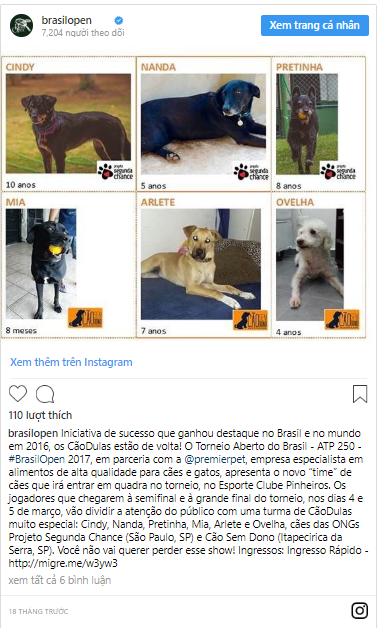