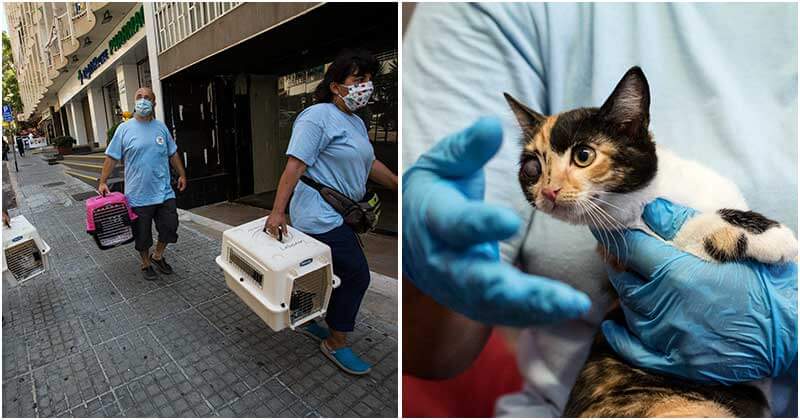 The massive explosion in Beirut early this month did not only cause great losses and injure thousands of people, it also affected pets and animals. The explosion reportedly left hundreds of animals trapped or lost in the rubble of the city.

Thankfully, a global animal welfare organization called FOUR PAWS teamed up with Animals Lebanon to help save animals caught in the wreckage of the explosion. According to Animals Lebanon, over 200 volunteers are working tirelessly and selflessly trying to rescue frightened cats and dogs stuck under rubble or in hiding.

“We had few cases where we would rescue a cat and then the building would collapse,” he said. “Since the day of the explosion, we have maybe climbed more than 300 floors going up and down, looking, looking into elevator shafts, looking under cars, looking amid in the rubble,” Kamal Khatib, a volunteer of Animals Lebanon said. “We are looking everywhere. It’s not easy at all,” Khatib said. “Even the friendliest of the house cats would scratch and bite. Definitely, it is very traumatizing for them. And from the rescues we see many of them were calling for help, they were crying.”

Volunteers say they have happily reunited missing pets with their beloved owners. But many others still stay at the group’s shelter, waiting for owners to come and take them home. According to a press release, FOUR PAWS teams are searching for poor animals to care for them and return them to their owners. For cats and dogs who cannot be reunited with their owners, the organization will help them find forever homes.

“The unstable political and economic situation in Lebanon as well as the COVID-19 pandemic, are challenging for us. But for many people, pets are like family members,” said Khalil. “That is why we will be searching and caring for surviving animals around the clock in the coming weeks,” Dr. Amir Khalil, FOUR PAWS veterinarian and leader of the Beirut mission said in a statement. “We will also use the rescue operations to vaccinate stray animals in the area against rabies — just another source of risk that we will take care of with preventative methods,” Khalil added.

FOUR PAWS and Animals Lebanon are calling for help so they can continue saving all the other animals who are lost, stranded or injured after the tragic explosion.

Do you love this good news? Tell us your thoughts in the comments below! Be sure to share this post with your friends and family members!

10+ Pets Who Love Their Owners More Than Anything

20+ Awesome Photos Of Animals That Love Interacting With Butterflies