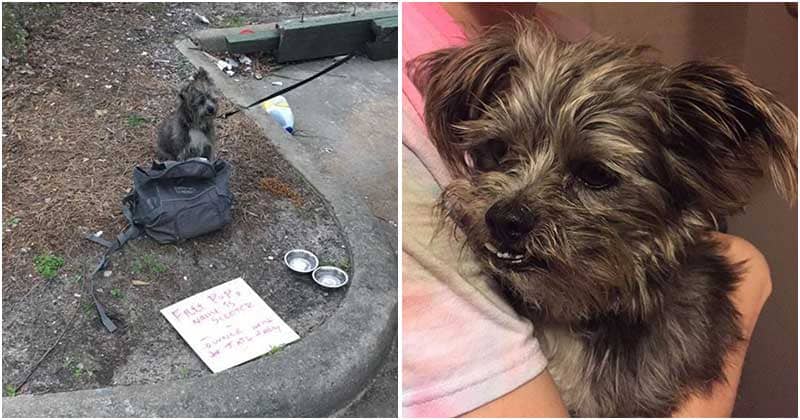 Meet Scooter, the pup who was tied to a dumpster in a shopping mall parking lot in South Carolina and left with a sad note: “Free Pup. My name is Scooter. Owner Went To Jail Today.” A couple spotted him and quickly freed him from the dumpster. Thankfully, Scooter was healthy and nothing bad happened to him. The couple decided to take some photos and posted them online with the hopes that someone would help this poor dog. The heartbreaking photos of Scooter quickly went viral on social media and gained the attention of Paula Langford, the founder of a local foster-based rescue group called South Eastern Homeless Animals (SEHA). After seeing the photos of abandoned dog, Langford knew that she had to help him. She immediately contacted with the couple and asked them to take him in. “I just reached out to them and said, ‘I’ll take the dog,” Langford told The Dodo. “‘I have a microchip scanner, I’ll get him scanned and validate the story first. And then we’ll get him wherever it is that he belongs.” Later that day, Langford came to pick Scooter up at a gas station. “As soon as I saw him, I knew this was a loved pet,” Langford said. “He was abandoned with an expensive carrying case for him, an expensive collar, a bag of grain-free dog food.” After scanning Scooter’s microchip, Langford found out the following: “When he was arrested, his [the owner’s] main concern was that his dog did not go to the shelter, so he handed his belongings, his money, his backpack, his carrying bag and his beloved dog to his friends and asked them to ensure that the dog was safe.” Scooter’s owner asked his friends to care for his dog, but sadly, they didn’t promise and abandoned his beloved dog. Langford welcomed Scooter into her home and managed to get in touch with the owner’s mom, who lives in Colorado. Thankfully, the mother was happy to care for him. “It was a very touching and emotional reunion, and it was quite obvious that Scooter was very happy to see his family again,” Langford said. “I am 100 percent confident in my decision to reunite this beloved pup with his family.” “When an animal is found on the streets, the ultimate hope is that the animal has a loving family looking for them,” Langford said. “However in more cases than not, that is not the outcome. In Scooter’s situation, he was a loved and treasured member of a wonderful family. And while it was emotional for me to say goodbye, I have no doubt that he is exactly where he belongs.” What do you think about this story? Please let us know your thoughts in the comments below! Be sure to share this with your friends and family members!

12 Dog Breeds That Are Not Good At Swimming