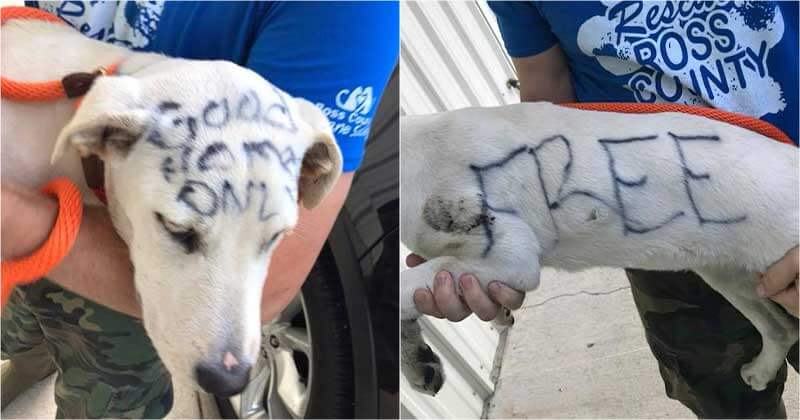 Every dog is a good dog. They deserve to have a happy family. While some haven’t found a home yet some are abandoned by people who adopt them. These people dump their dogs somewhere and leave some messages or not. They finish sending away their furry friends. They must do it for some reason but not all understandable. The lab-mix puppy in today’s story is an example. The poor little dog was found left abandoned in the part with “FREE” written on her fur in black permanent marker. She had a sad story behind. According to Sarah Cantrell, office manager and adoption coordinator at the Ross County Humane Society in Chillicothe, Ohio, the poor pup was dumped in Yoctangee Park ahead of the Feast of the Flowering Moon Festival, which takes place during Memorial Day weekend. That wasn’t all. The poor pup had the words “FREE DOG” crudely labeled on her body in permanent marker. They left the dog to fend for themselves was awful.

You can watch the video here.

“We were all kind of shocked,” Cantrell told the media. “It just seems like a childish thing to do.” He continued.

Luckily, the Chillicothe Police Department spotted the dog and then brought her to the Ross County Humane Society. Because not all dumped dogs survive or even make it to a shelter. After some investigation, the dog’s old owner has been charged with cruelty to animals, abandonment and failure to license. The dog was later named Marvella, meaning a miracle. She got a bath that helped remove much of the permanent marker. “She’s healthy and sweet and thankfully did not suffer from heat exposure,” Cantrell talked about Marvella’s situation. Luckily, she has found a forever home. A family put in an application to adopt Marvella and got approved. She has just started her happy days. Hope that Marvella enjoys living in her new home, and looking forward to hearing more good news from her!