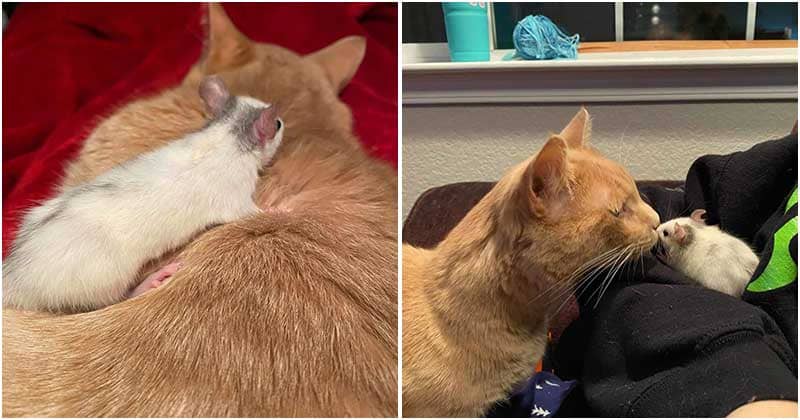 Cats and rats may have a reputation as being sworn enemies, but that is not true in some cases. Sometimes our feline friends and rodents can form amazing bonds and become buddies. They can decide to put aside their differences and embrace one another as best friends. If you don’t believe, the story of the friendship between a munchkin cat and a rescued rat below will change your mind. Shumai or Shu Shu for short, is a munchkin cat whose legs are shorter due to a genetic mutation. Due to his genetic makeup and medical mutations, Shumai is plagued with chronic pain and health issues. But luckily, he has a loving family that are willing to do anything to help bring him peace and happy. Amazingly, what the little Shu Shu needed was a new friend who could support him and was there for him whenever he needed – and that happened to be a rescued rat! Everything began when Tiffany Farrior, owner of Shu Shu, arrived at her new shop Moonwillow Metaphysical in Lakewood, Colorado. She came in the shop and was greeted by a tiny visitor who had broken in during the night!!! “She was curled up on my desk snoozing away when I got in. I was cautious when I picked her up, not knowing if she was gonna bite. But she crawled right into my hands and arms and snuggled right up!” Tiffany immediately got in touch with the landlord: “You can’t keep that in the building, sorry. We had a neighbor to the East last year that was letting his domestic rats loose, and we had to report him.” When Tiffany saw the rat happily dozing in her arm, she decided to bring her home. However, she was nervous as she had munchkin Shumai and a rescue Bengal cat named Mrs. Ho Kim. It was crazy to let the rat live with two of its natural predators under the same roof, but Tiffany decided she had to try. In her work, at least she had an inside connection with the animals. “I’m a psychic Medium and Animal communicator and animals have always found me. From a 3-day-old baby hawk laying on the ground in my path and no trees or nests in sight, to this loving little rat. I was so worried about bringing her home though. I didn’t want her to get hurt or them to scare her to the point of stressing her out either. Not to mention stressing the cats either. I’m hoping that Ho Kim’s motherliness expands to rats if I tell her this is friend, not food!” Surprisingly, Shu Shu and Mrs. Ho Kim didn’t immediately attack the rat as cats may normally do to a rat. In fact, they acted completely opposite! “Shumai got on my lap and just about stood on her trying to sniff my face as usual. Once he saw her, they touched noses! Her whiskers made him sneeze and she jumped a little like whoa. HAHA And then he settled down and laid in my lap a foot from her!” Tiffany and her husband Ikaika were surprised what was happening. She shrugged and decided “okay, we now have a rescue rat. “When we go to put her back in her cage, she just sits in our hand like “no, I’ll stay here with you”. Melts my heart!!! The couple tried to find her a name, and they finally found one. “These crazy kids. We were calling her by the name we wanted and she totally ignore me. Called her Rizzo and she turned around like “hey, that’s me!” Shumai and Rizzo become best friends and they are now inseparable. They chose to be BFFs instead of bitter rivals. “Funniest thing ever. Had Rizzo on the couch with us and Mrs. Ho Kim was saying “Hi”. Rizzo took off running towards Ho Kim and she ran backwards to avoid her. Then she tried scuffing her like a kitten LOL. Then Shumai came up and they were touching noses. Rizzo walked up to him, touched his foot, and he turned and ran. Big chickens.” Tiffany knows that Rizzo the rat may have come just when Shu Shu needed her the most. She believes that Rizzo was sent her to comfort the munchkin cat when he’s not feeling so well. It just goes to show, you can always find friendship in the unlikeliest of places.

If you love this story, don’t forget to follow Moonwillow Metaphysical to see their inspiring, blossoming love story! Be sure to share this with your friends and family members!

25 Photos That Prove Cats Are So Flexible And Agile