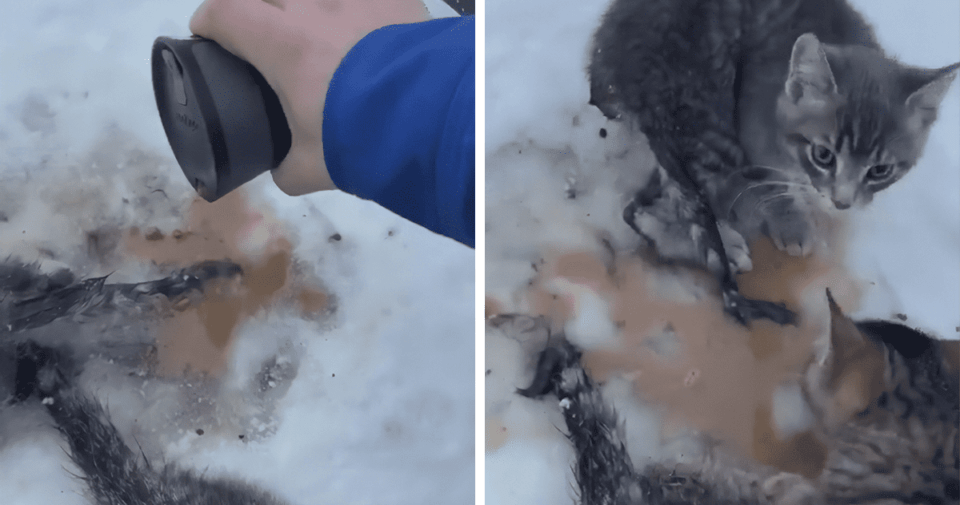 Do you believe that coffee can be used to save lives? Well, it sounds crazy but it is a true story in Drayton Valley, Alberta, Canada. Kendall Diwisch, a Canadian oil worker, was doing his work when he stumbled upon 3 kittens on one of the back roads. Diwisch stopped to investigate and noticed that two of the three kittens had their tails frozen to the snow. As Kendall found the kitties, they were in pretty bad shape and couldn’t move anywhere. He suspected that they were abandoned by someone, and they most likely spent all night being stuck and frozen to the ground. Without hesitation, he ran back to his car, picked up his travel mug, and used his warm coffee to save the poor kittens. He tried to melt the freezing ice by pouring warm coffee on their frozen tails. And luckily, it worked. Diwisch was so happy because no kittens were scalded or injured during the rescue. Diwisch took the 3 furry felines back to the car and brought them to his home, where they were warmed up and fed. He later took to Facebook to share about this little adventure. And of course, his story and video soon went viral on social media. One half of the internet called him as a hero and praised him for his selfless act. A few days later, Kendall updated his post on Facebook to tell everyone that the three little furballs found a new warm home, where they were all going to be well taken care of. What do you think of this man’s selfless acts? Have any rescue stories of your own? Tell us your thoughts about this story in the comments below.