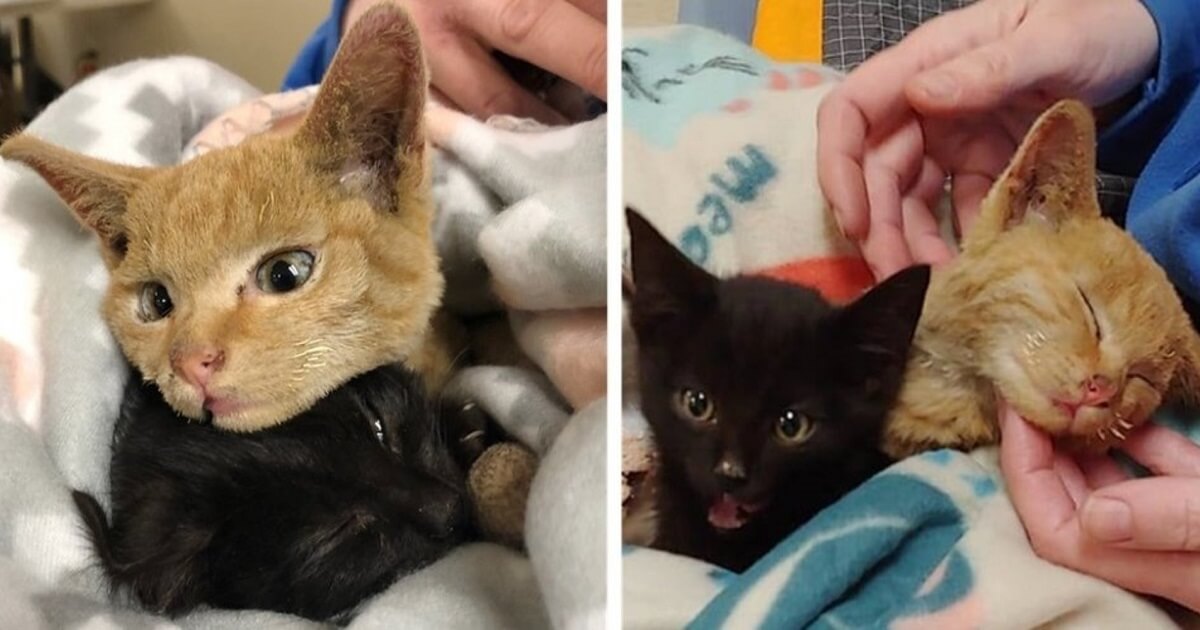 Two tiny kittens were found in Concow, California after the devastating wildfire ravaged the town. Luckily, Shayla Sullivan, an animal rescuer based in Browns Valley, California and several other volunteers joined a local rescue team, Cowboy 911 saved them from disaster areas. When they arrived, they were stunned by the devastation of wildfire. They noticed two little kittens scurrying around with an adult cat nearby, who maybe their mom. The kitties quickly hid into a wood-burning stove when they saw the rescuers. The rescuers believed that the cat mother had hidden her kittens in the stove to shield them and save their lives. The cat mom ran off while rescuers approached to save the kittens who needed immediate medical attention and care. A rescuer used rubber gloves to reach into the stove and bring out a tiny black kitten first and then an orange kitten who had been burned. The kittens were so scared and cold but they kept each other alive until rescue came. They were completely inseparable and would cry for each other if they weren’t together. Shayla brought them to her son and her friend. She asked them to transport the kitties to FieldHaven Feline Center, in Lincoln, California to be tended by the staff and the medical team. They were named the kittens Ash (black) and Phoenix (orange). With help from everyone involved in this rescue, rescuers hope that they have been reunited with their mom and family. The brother and sister kept each other comforted through the ordeal. They will be loved and been together forever. If you would like to support their rescue efforts, click here to see how you can help. Please share this story with your friends and family!

Meet Bone Bone, The Enormous Fluffy Kitty From Thailand That Everyone Asks To Take A Picture With