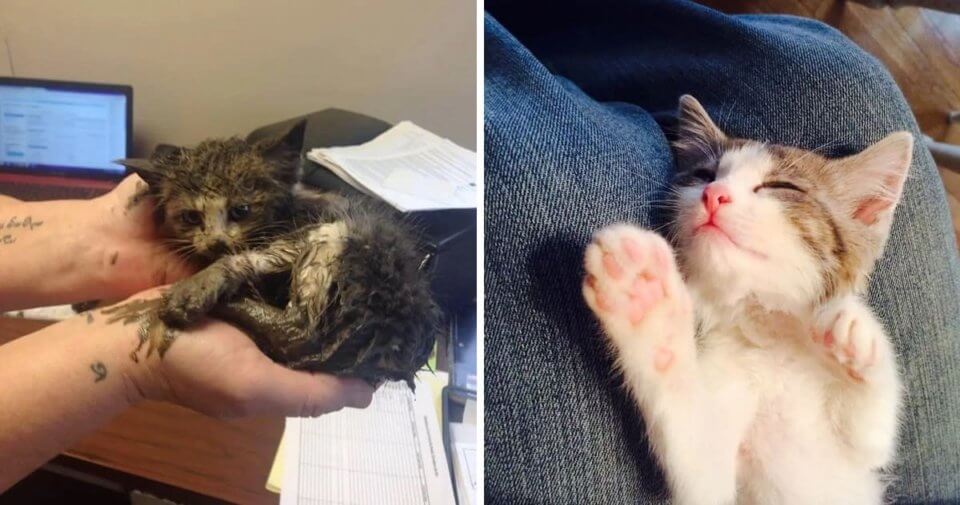 While taking a walk one day, a good samaritan found a tiny kitten in freezing mud, buried under debris. It was September, but it was very cold. His legs were stuck in the mud, so he was unable to move. He was weak and lost a lot of strength due to struggling to find a way out. The good person contacted Itty Bitty Kitty Committee, a rescue group in Charleston, West Virginia to call for help. “The weather was much colder at that time and a kitten was stuck in the freezing mud under a scrap of metal,” Dorella Tuckwiller, founder of IBKC, said. It took a small army of teamwork to get the poor tiny kitten out of the mud. They wrapped the kitten in a shirt to keep him warm and took him to the vet immediately.

STEELY DAN: Watch this amazing kitty this morning!! He has been released from the veterinarian hospital and will be going to his foster home very soon. <3

“The kitten was dug out and after pleas for help we got him from Huntington to one of our wonderful vets, in Charleston. He was so cold that he was transported inside a shirt while being held closely to the heart of the human who was driving.” The little boy was almost nonresponsive when the rescuers brought him to an animal hospital. “He was hypothermic and almost non responsive by the time he made it to Good Shepherd Veterinarian Hospital.” But thanks to the help and care of the whole team of staff, he got everything he needed to battle through the night. The rescuers also stayed with him to make sure he was doing well at the hospital. The next morning, he was a completely different kitten, full of energy and very playful. They called him Steely Dan and quickly found him a forever home. Before finding his new home, he moved into a foster home where he was nursed and loved by his foster mom Kelly and her family. “He is checking things out! Already used the potty and met his new friends,” Kelly said. The rescue kitty stole everyone’s heart in his foster home, so the family decided to adopt him. He was renamed Oscar the Man Kitty. The poor kitten finally found his beloved owners and his forever home! There’s so much happiness and love on his face! Watch the video to learn more about the rescue:

We’re happy that there are still people willing to help animals in need. If you love this rescue, please share it with your friends and family members!

Kitten Rescued From Snowy Freeway Loves To Be Held And Cuddled