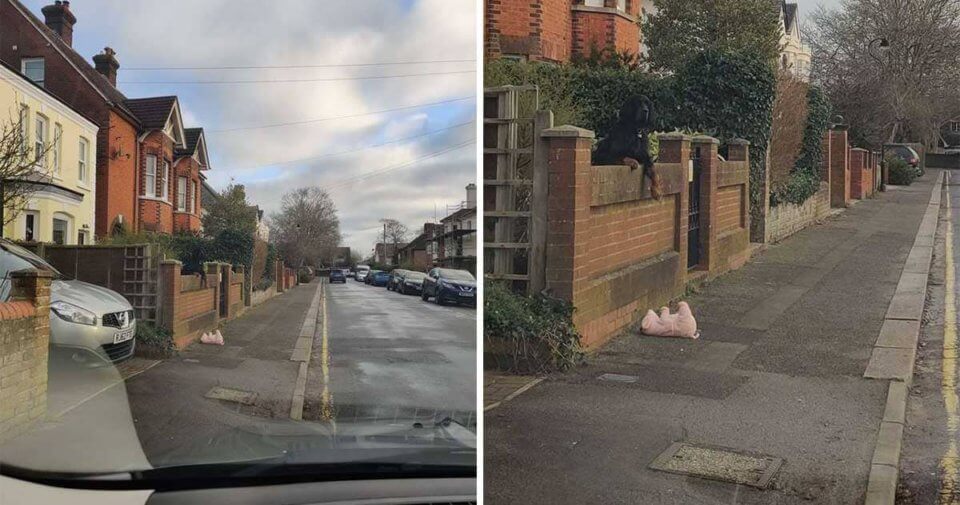 Claire Cummings, from Basingstoke, England, was driving to her friend’s house when she suddenly saw a stuffed pig lying on the sidewalk. Thinking there was something unusual, she peered in her rearview mirror and realized there was a desperate dog on the other side of the wall. It was clear that the dog had somehow dropped his beloved toy over the wall and had no way of getting it back.

Claire understands that nothing can break a dog’s heart than losing their beloved plaything. For this reason, when she saw a dog separated from his toy, she knew she couldn’t just leave the dog hanging and had to do something to help him. She turned the car around, approached the perplexed dog, and got the toy for him. “We are huge animal lovers and would have hated to have thought that he could be sitting there waiting and nobody would help,” Claire said.

Claire didn’t know how long the dog had been waiting there, but when she stopped her car and went out, she could see the dog looking at her in the hope that she would come along and help him.

“He could have easily jumped over the wall he was leaning on to get it but has obviously been trained very well not to jump over the wall,” she told The Dodo. She shared the story on the Dogspotting Society Facebook group, where many people called her a hero and praised her for her kindness. Not surprisingly, the post has gone viral, and now it has nearly 30.000 reactions, 1.700 comments, and 500 shares.

As soon as the dog got his toy back, he was thrilled and happily went back inside. He even gave Claire some cuddles and hugs as thanks before she drove away. Claire was also happy that she was able to help the sweet dog and make his day better!

Thank you for your kindness, Claire! We’re glad he was able to retrieve his beloved toy! Share this heartwarming story with your friends to brighten up their day!