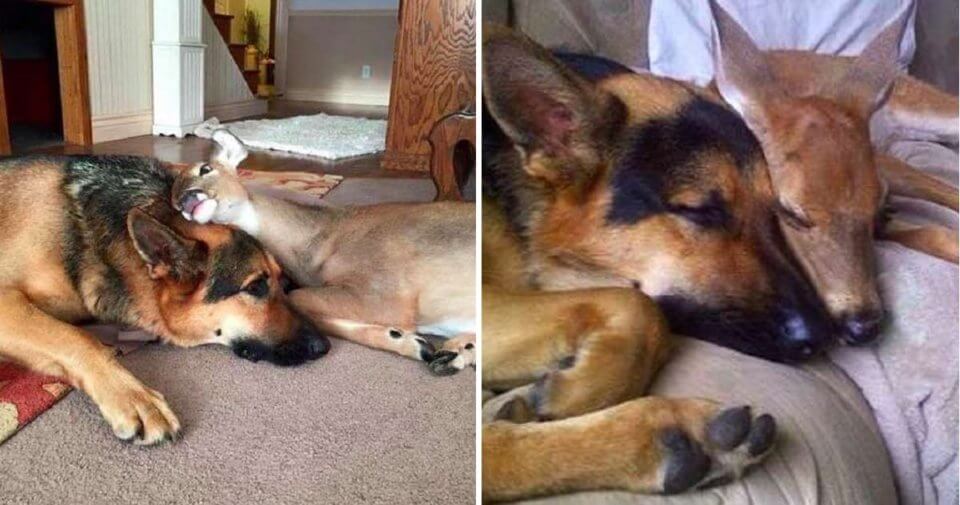 As you know, dogs help us in every way. Beyond providing companionship, they help people in need and sometimes take on great jobs that can make the world a better place. Meet Sarge, a 9-year-old German Shepherd who loves to care for those who needed it most. When Sarge was a puppy, he was not friendly and was a bit of a grump. However, everything changed when his mom, Cheryl Stephen brought home a fawn, named Buckwheat. The fawn was found lying in the middle of the road. He may have been abandoned by his mother likely wouldn’t have survived had he not been found by Sarge’s mom. It is unknown what happened to the baby deer’s mother, but thanks to Cheryl’s help, the baby found a safe place to recover his health. “Something clicked in Sarge and he took to Buckwheat instantly,” Cheryl Stephen told The Dodo. “He wanted to be involved with every aspect of Buckwheat’s care. He took on the role of being Buckwheat’s guardian. None of the other dogs were allowed near the baby.”

An orphaned fawn is adopted by a German shepherd. 💚💙❤️

When Buckwheat came back to health, he was released back into the wild. Since, Sarge has taken on responsibility for caring for orphaned and injured wild fawns. No matter what happens, he is always happy to do his job and makes sure to give poor animals lots of love.

“When I walk in the door carrying a fawn, Sarge springs into action. He wants to check them over and he will frantically sniff and nose around to determine their condition,” Stephen said. “The fawns are drawn to Sarge and feel safe in his presence. Sarge won’t leave their side.” “It is my hope that these pictures will help others see just how loving and affectionate deer are. They have a soul, just like us humans,” Stephen said. “If a dog can love and care for deer, people can, too.” Sarge is an amazing dog, so his family is so proud of him. If you love Sarge, you can follow him on Instagram to update his daily life with injured and orphaned wildlife who are brought his home to recover.

Love this story? Feel free to share it with your friends and family members and don’t forget to let us know your thoughts in comments below!