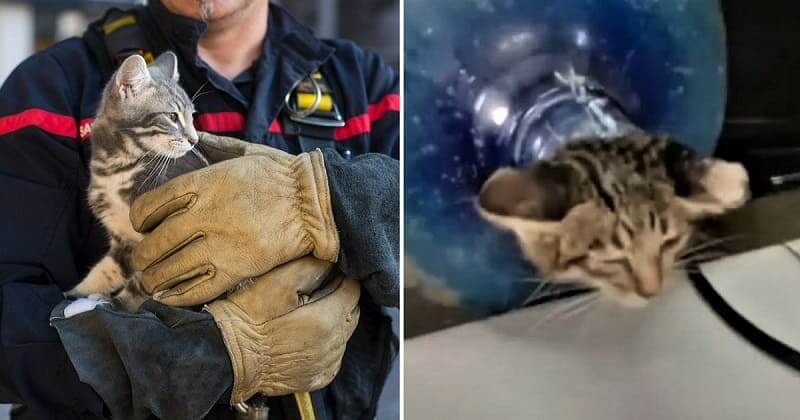 A kitten was found trapped inside a 19-liter water jug, with only her head sticking out from the narrow opening. The incident took place in the Indonesian capital, Jakarta. Most likely, in curiosity, the kitten had squeezed into the jug and then realized that he was unable to come out of it. This resulted in her being stuck for some time. She mewed with fear and unknown injuries. Eko Sumarno, the agency’s operational chief, said residents found the kitten in the precarious position. They said that they weren’t sure exactly how to remove the poor animal from the small hole, so they brought the jug to the fire station in Cengkareng to look for help from firefighters. “They felt sorry for the cat, so they took it to a fire station in Cengkareng,” he said on Friday, as quoted by kompas.com. The firefighters knew they needed to do it fast and safely as no one could be sure just how long the kitten had been stuck. With the help of some machinery, they carefully cut the water jug and made a cut in its neck to free the kitten. The entire operation took about 30 minutes. Thankfully, there were no visible injuries to the kitten. “It took about 30 minutes to get the cat out of the jug,” Eko said. After being rescued from the water jug, the extremely lucky kitten was then showered with snuggles and hugs.

The kitten was safe and sound after the rescue. It was also revealed that she is a stray cat living on the streets. Therefore, the residents who first discovered the kitten decided to adopt her. They later came to the fire station to take her home with them. We hope that the kitten will be loved and cared by her new owners. After everything happened, she finally found a forever home and loving owners that she deserves.

Watch the full rescue in the video below:

Firefighters in Jakarta have received many emergency requests unrelated to fires, including removing a ring stuck on someone’s finger, saving a cat from the bottom of a well, and rescuing a kitten stuck inside a water jug.

What do you think about this story? Let us know your thoughts in the comments below! Don’t forget to spread this rescue to your friends and family members!