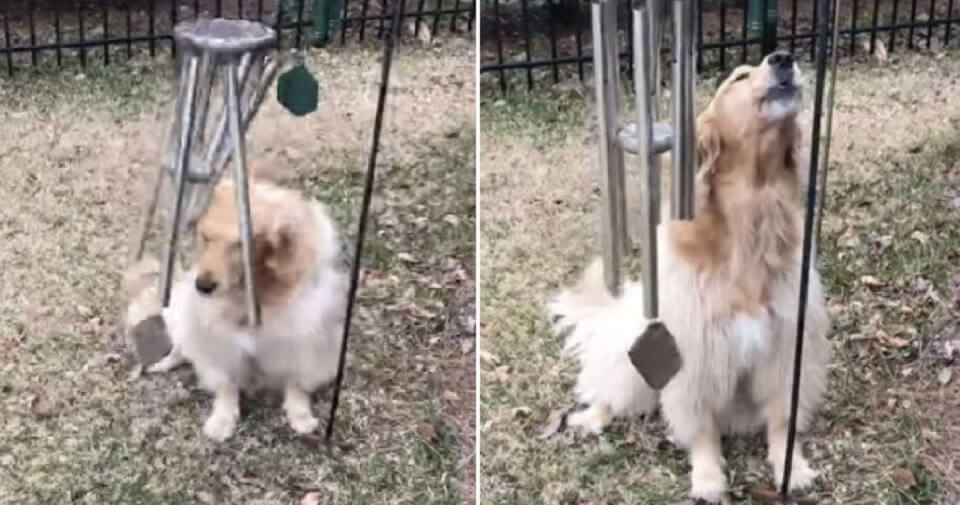 Meet Bleu, a 4-year-old golden retriever who has a musical talent that can make you fall in love when watching her videos.

Not only can the sweet dog sing, but she plays with wind chimes and uses them as her instrument. According to Bleu’s owner, Ana Brown, an artist from Wilmington, North Carolina, she first started showing her fascination with wind chimes when she was only four months old. “When she was really, really little, like 4 months old, she walked outside and her head hit the wind chimes because they were down so low,” Brown told The Dodo. “We kinda freaked thinking that would be horrible for her ears — but she just started singing.”

This is the adorable moment Bleu ‘singing’ along to the sound of the chimes:

Bleu wishes you a Happy Friday!!

Ever since then, Bleu has made it her routine to go outside at least once a day to hone her musical skills. “She sings almost every day and wags her tail when she sings.” When the wind chimes start to get too quiet, Bleu rubs her head against them so the singalong can continue. “It’s the most precious thing when she looks at you and sings, hitting her head against the wind chimes. I don’t know if she loves the sound, or if she knows she can play it herself. It’s almost like she tries to keep in tune with it,” Brown said.

Not surprisingly, Bleu quickly became famous thanks to her unique talent. She has earned her quite a large audience and fans all over the world as well. Everyone knows and loves her, but the happy dog is unaware of her online fame.

“My mom got us a really nice wind chime for Christmas and [Bleu] won’t touch it,” Brown said. “She wants nothing to do with it. She just wants the wind chimes that she’s used to.” No matter what happens, she still loves her old wind chimes. Ms Brown said she will make effective use of Bleu’s unique musical talent for good causes. ‘Watching her bring happiness to the world has been the gift of a lifetime.”

If you love Bleu and want to know more about her, you can follow her on Facebook page. Don’t forget to share her talent with everyone!