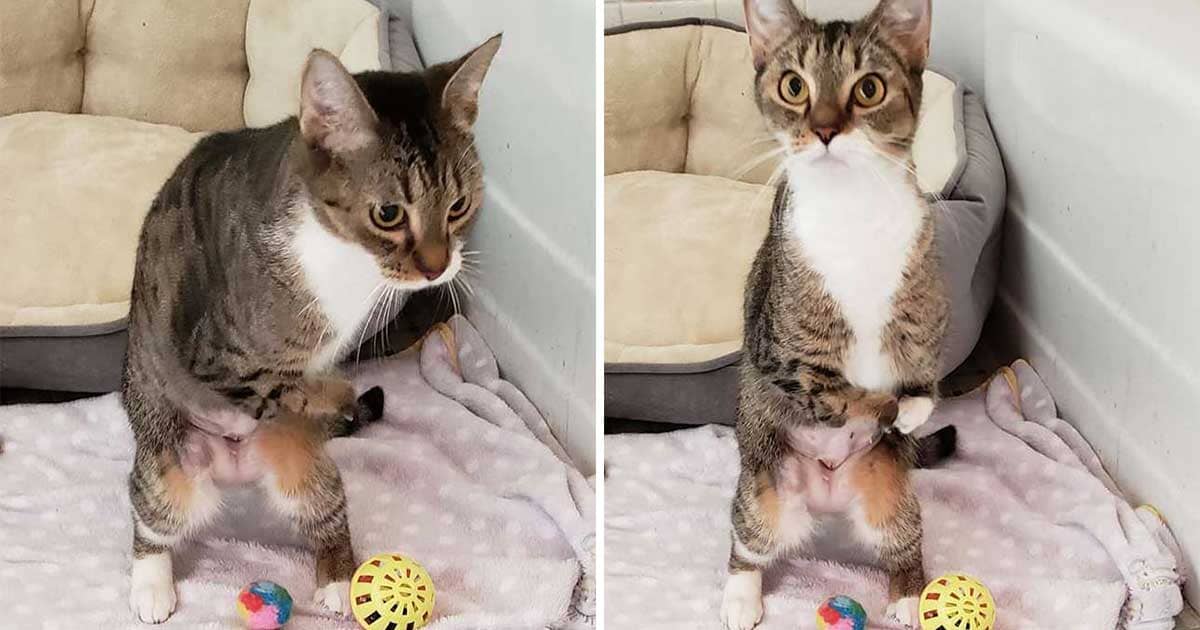 Meet Roo, the cute cat was born with crooked front legs due to contracted tendons. However, the little girl doesn’t seem to realize she’s any different. She is always confident and can do anything like other cats.

She was cared by a man in Indiana after he discovered her living outside near his house. The man noticed her twisted front legs, so he built a ramp leading up to his porch so that Roo could stop by for food and a little affection. But as the man was about to move away, he contacted the Official Humane Association of Clark County about Roo’s situation. Thankfully, the shelter agreed to take her in.

When Roo arrived at the animal shelter, everyone at the shelter immediately fell in love with her. They instantly noticed her twisted front legs and wondered how she managed to get around. After that, they saw her hopping, rolling, and standing on her back legs. It turns out that Roo could move around by using her back legs — like a little human.

Roo is now all settled in at the shelter and looking for a forever home. Although everyone at the shelter absolutely loves Roo and wants to stay with her, they also wish to find her the perfect owner who loves her, understands her differences and can support her if she ever needs any extra help.

Peggy Campbell-Rensel, who works at the Official Humane Association of Clark County, told The Dodo, “He was afraid the new tenants wouldn’t care for her.”

Roo herself doesn’t seem to realize that she’s any different from other cats, so we hope that she will find a good owner who sees her the same way.

If you or your friends are interested in adopting Roo, you can contact the Official Humane Association of Clark County for more information.