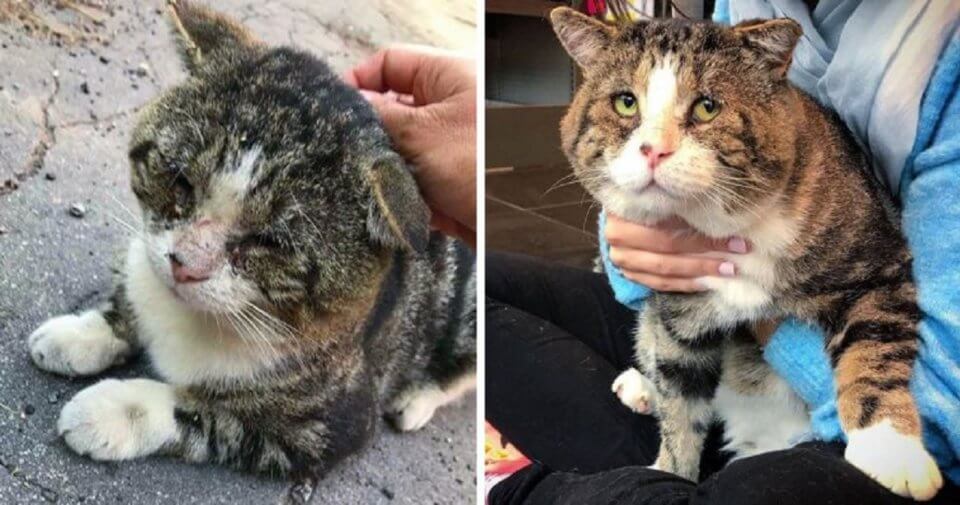 For many people, winter is one of their desirable seasons. It brings about beautiful things and wonderful sights to see. However,for our stray feline friends winter is an awful season which they have to struggle to live. Meet Padou the stray cat who has spent years on the streets in the neighborhood (of Montreal, Canada). Life had been tough on the little guy when he had to fight to survive in many harsh winters. Sadly, many people saw him wander the streets but nobody helped him. Luckily, a wonderful woman named Aya spotted the kitty and saved him. However, Padou was fearful of people and he didn’t let anyone touch him. When seeing little poor kitten’s case, Aya decided to help him. She began feeding him every day to gain his trust. Aya connected a local cat rescue group Chatons Orphelins
Montréal to save Padou because his condition quickly deteriorated, he started having trouble to breathe. Aya couldn’t let him go through bitter winter in Canada. They set out traps in Padou’s area but the plan didn’t work because Padou knew how to avoid and wouldn’t go into a trap. So, rescuers provided him food and when he was eating, they would hand feed him so the kitty would get used to being touched. Finally, they were able to touch and bring him to the vet. Cat Shelter In Romania Rescued Over 200 Cats In 3 Years

Kitten Makes Stunning Transformation After Being Rescued From Freezing Mud