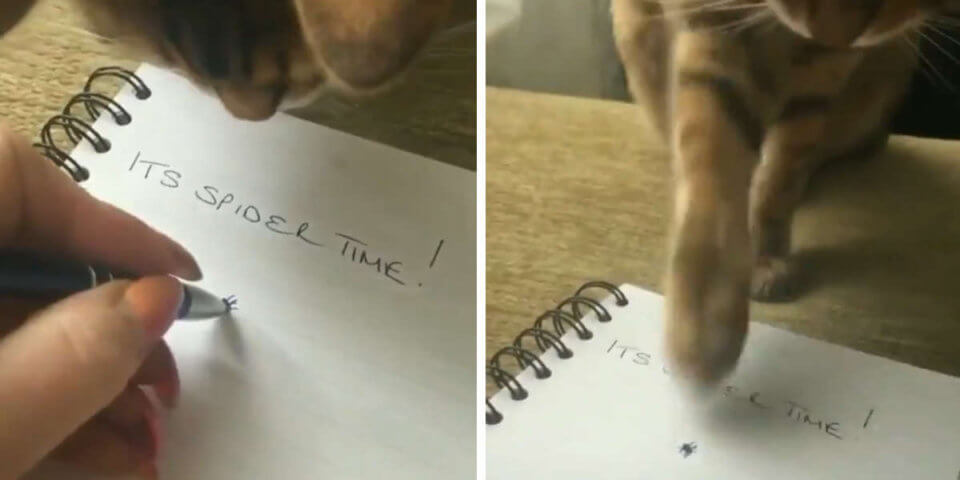 A cute cat named John was seriously confused after trying to attack a fake spider that his owner just drew on paper. The cat clearly had no idea the spider was simply a drawing, so he tried to repeatedly attack it to protect his owner.

Thankfully, the owner captured the video of John and shared it on Facebook. It’s not surprising that people can’t get enough of the funny video and the easily-fooled kitty.

Here he is again – gonna get that spider. The owner says she has been drawing spiders for years and the cat never tires of this game.

Despite watching all along as his owner drew the spider on the notepad, John suddenly reacted as though it was real. He rushed to rescue his owner and uses his claws to fight with the spider. He even tried to bite the pesky drawing, but obviously that didn’t work.

It was clear that the cat wanted to defend his owner from the scary spider, but sadly he was fooled.

According to John’s owner, MG Wine, he might not be easily-fooled after all. Instead, he loves doing it because this may be a fun little act of make-believe for them to do together: “The owner says she has been drawing spiders for years and the cat never tires of this game,” Wine wrote.

Do you love this video? Feel free to let us know your thoughts in comments below!

20 Cats That Can Go Crazy With Or Without Catnip

10+ Things That Only Cat Owners Can Understand

17-year-old Cat Befriends 85-year-old Stranger And Turns Her Into A Kid Again..