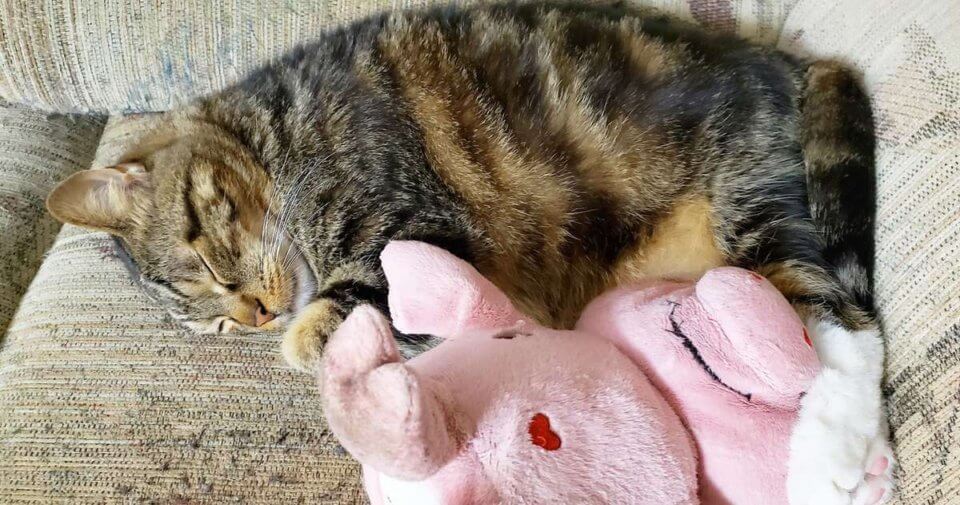 Diego is a sweet male cat who has a lot of endearing qualities. However, due to some health issues when he was younger, he is a bit smaller than most cats his age. For this reason, he can’t always play the same way they can. Instead, he loves carrying his toys around with him. Although he loved doing that, he never really had a favorite toy until he met his stuffed pig. Diego received the stuffed pig as a gift from a family member a few years ago. From the moment he got the pig, he has become absolutely obsessed with it and has refused to let it out of his sight. “He keeps it nearby all the time,” Crystal Cook, Diego’s mom, told The Dodo. “He takes it wherever he goes. He loves his little piggy.” Diego has been carrying his favorite stuffed pig with him everywhere he goes. He spends all his time with his stuffed pig — he even likes to clean his pig, treating it as if it were his very own kitten. They play together, eat together, and nap together. The two are always together and inseparable. “If he can’t find it he walks around meowing,” Cook said. “Sometimes when the door is cracked he gets locked in a room trying to go through due to the size of the stuffed pig.” The family has no idea why Diego loves his pig so much, but they completely accepted the fact that he and his stuffed pig come as a pair. And besides, it’s simply too cute! Do you love Diego’s story? Feel free to share it with your friends and family members!

Meet Marley, The Permanently Disappointed Cat Who Looks Like He’s Always Judging You

Kitten Trying To Learn How To Use Litter Box, But Then… He Does The Funniest Thing Ever, OMG