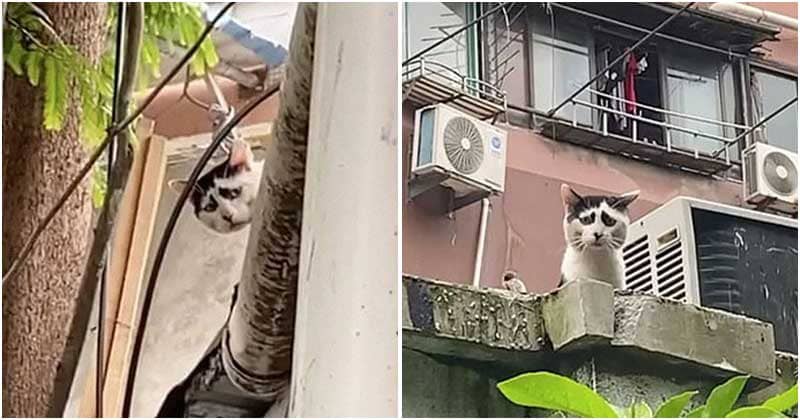 Internet community often loves cats with funny facial expressions or unique and unusual markings. So it’s not surprising that the internet is going crazy over a feline from China who has markings on his face that make him look permanently sad. The first person to spot the cat was a university student, known as Simpson Xin on social media. After meeting the unique-looking kitty on the streets of Shanghai, the student shared the clips she took on Douyin – China’s version of TikTok. The video quickly went viral with over 2 million views – and still counting. The cat named Moggie is thought to be a stray cat living on the streets of Shanghai. People around the world love Moggie due to the black spots above his eyes, appears to be constantly upset. His two black spots above his eyes that look like a pair of furrowed eyebrows. He looks so sad that people wonder, “What happened to you? Why are you looking so sad!’.

Another one replied: “Hahaha the cat is a real-life emoji!”

A third netizen said: ‘This is hilarious. It reminds me of my headteacher who was always angry at me haha.’ Since the video went viral, Ms Xin regularly comes to check on the cat and bring him food and water. Many people asked her to adopt the stray, but she stated that she wasn’t able to bring him home since she already had a cat at her small apartment and didn’t have room for another one. If you know anyone who lives in Shanghai, China, please share this article with them to help Moggie the sad cat find a forever home. Feel free to share the pictures and videos of the cat with the unique markings with your friends and family members!

10+ Cute Reasons To Get A Cat Right Away

25 Silly Cats Who Have No Concept Of Cat Beds

Meet Honey Bee, The Rescued Blind Cat Who Loves To Go Hiking With Her Humans

GPS Trackers Reveal Your Cat’s Trips During The Night