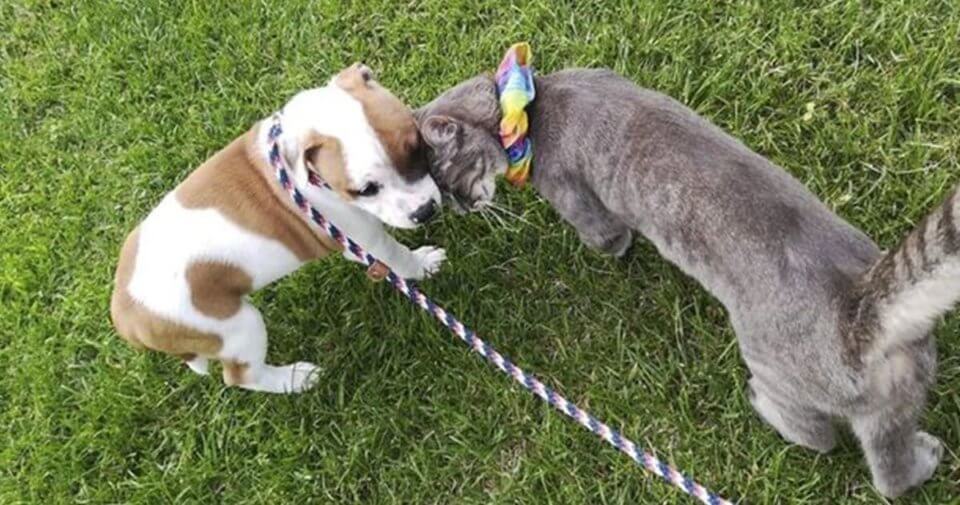 In this article, we would like to introduce to you a video that shows the moment a puppy and a cat say goodbye to each other after the dog gets adopted and is ready to move into his new home. The cat named Cheerio took care of Elvis the Staffordshire bull terrier since he was a tiny pup. For this reason, they grew a strong bond and became best pals. Cheerio’s owner, Corrinne Minard said that the pair were inseparable. They followed each other around the house, played and slept together. “Cheerio and Elvis were loving and playful together,” Corrinne said. “Cheerio is our rescue kitty who gets along really well with our family’s show dogs. When we had a litter of 9 puppies, Elvis was the last in the litter to go home to his forever family, and the two of them became great friends. Cheerio also loves the puppies’ great-grandma!” Sadly, it was time to say goodbye to Elvis after he finally found his forever home with loving owners. Before being adopted and moving to his new home, he was able to spend one last moment with his best friend. The duo had one last cuddle to say farewell. This is the moment the pair said goodbye when Elvis was finally adopted by his new family.

Elvis moved to his new home, while Cheerio will stay with Corrinne. The duo may be apart now, but we believe that Elvis and Cheerio will never forget each other. Do you love this touching video? Tell us your thoughts in the comments below and don’t forget to share this video with your friends and family members!

Meet Kitzia, The New Grumpy Cat Who Looks Even Angrier Than Her Late Predecessor