Meet Ray – a stunning Himalayan and his sister-from-another-mister, a Calico cutie named Bea. They were taken to Sacramento’s Front Street Animal Shelter on September 21, 2017.

When the two arrived at the shelter, rescuers were shocked to see both of them were malnourished, Ray had serious eye issues and he was blind in both. Amazingly, Bea seems to understand Ray’s difficult life, so she follows Ray wherever he goes and helps her blind friend. Ray also knows to rely on Bea to lead him with her tail when they are in new locations. 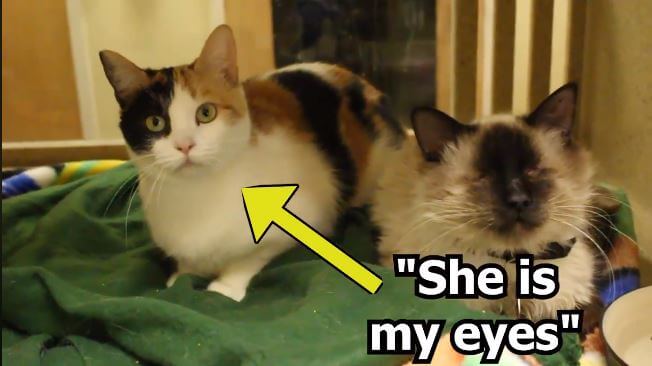 Bea became Ray’s eyes and they’re always together. Therefore, the shelter knew they were a bonded pair and would have to be adopted together and of course, that is not an easy thing as adopters just wanted to adopt Bea.

Six weeks have passed and this adorable pair is still waiting for someone who is willing to adopt them. Maybe potential adopters are concerned about Ray’s blindness – but with Bea by his side, everything will be fine.

Blind cat and his friend want to be adopted together

Good news!! ADOPTED!!This blind cat and his best friend have been at the shelter for months, waiting for that perfect home where they can both be adopted together. Ray is a lot more confident with Bea around, and they'd like to stay friends. That's why they need Facebook magic to get the word out – we know the right home is out there somewhere! Animal ID#'s 536089 and 536090

After that, Ray and Bea’s story was shared on the Front Street Animal Shelter Facebook page in order to help them find a family. Thankfully, they finally found a forever home after months of being overlooked.

20 Animals Who Rely On Humans For Support

25 Unforgettably Sweet Pictures Between Wild Animals And Their Babies

25 Animals Who Show Us The True Definition Of Sound Sleep